It looks like Germany has blinked. Or, more accurately, the leaders of Italy and Spain shoved hot bamboo spikes under Angela Merkel’s eyelids until she cried Onkel!

Amid bad-tempered talks that continued through the night, Italy and Spain stunned the Germans by blocking progress on an overall deal at a two-day EU summit in Brussels until they obtained guarantees that the eurozone would act to cut the soaring costs of their borrowing.

The tough negotiations were deadlocked for hours, prompting the departure from the summit after midnight of the 10 non-euro countries, including Britain, leaving the eurozone leaders to fight it out. After 14 hours of wrangling, they emerged with a three-point statement rewriting 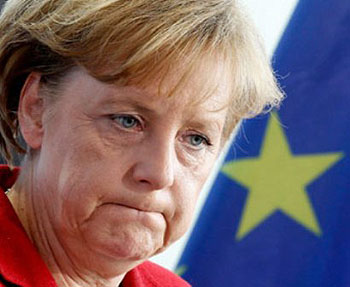 the rules for the eurozone’s new bailout regime in a way likely to soften the draconian terms that have accompanied the rescue programmes for Greece, Portugal, and Ireland over the past two years.

This isn’t quite the same thing as support for eurobonds, which would allow countries to fund their deficits with bonds backed by the entire eurozone (i.e., Germany) but it’s a step in that direction. In the deal announced a couple of weeks ago, money was loaned to Spain, which it used to bail out its banks. But Spain was still on the hook for the money. Now money will be going straight to Spanish (and Italian, Irish, Greek. and Portuguese) banks, with the loans coming from the entire eurozone. The Irish are elated:

Eamon Gilmore, Ireland’s deputy prime minister, said the deal reached in the early hours at the EU summit represented “a major change” in European policy and was a course of action Dublin had been advocating for a long time. “This is a massive breakthrough for Ireland and it changes the game in terms of our bank debt,” he told Irish radio. “This deal will allow the country to recover much faster,” he said.

Enda Kenny, Ireland’s prime minister, hailed the move as a seismic shift in EU policy. “What was deemed to be unachievable has now become a reality and that principle has been established and decided and agreed upon by the council, by the heads of government,” Mr Kenny told reporters in Brussels.

Merkel, of course, still has domestic politics to worry about, so she put a brave face on things: “The details about liability” — i.e., who’s really responsible for these loans if they go bad — “still have to be negotiated individually,” she said, “and I can predict now that they will be quite difficult negotiations because we are in a new area, and for that reason it won’t just take only 10 days.” No doubt. But for now, the PIIGS have won a victory.