David Frum writes that the Great Recession has hit the young the hardest but that older Americans don’t care. They just want to protect their own lifestyles, and they’ll get their way by ruthlessly voting their self interest:

The economics blogger Steve Randy Waldman memorably and bitterly articulated the meaning of these grim facts. The long slump has revealed the preferences of the aging polities of the Western world. “Their overwhelming priority is to protect the purchasing power of incumbent creditors. That’s it. That’s everything. All other considerations are secondary” — including economic recovery.

We could jump-start the economy with a massive jolt of monetary and fiscal stimulus, but such a policy would risk inflation and pose a threat to retirement savings. So we don’t do it. We could borrow money to finance infrastructure 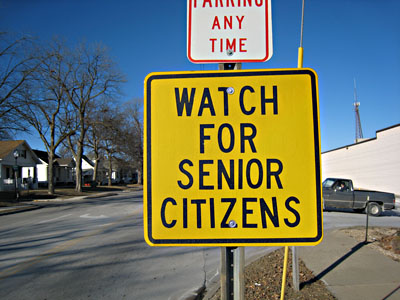 programs that would set people to work now and enrich society over the long haul — but that borrowing would have to be serviced by taxes to which older Americans fiercely object. So we don’t do that either.

….The old have always grumbled about the young. No doubt Cro-Magnons complained that their kids didn’t appreciate their effort to put a nice, dry cave above their heads. Yet we seem today to hear a new bitterness in the attitudes of the old, a special glee in reproaching and denouncing the young. In 2012 job seekers outnumber jobs offered by a margin of 3–1, down from a post-Depression record of 5.5–1 in early 2009, with the ratio worst among the youngest workers. As young job applicants collect rejection slips, the leading conservative policy intellectual, Charles Murray, has publicly urged his fellow older Americans to regard unemployed young men as “lazy, irresponsible, and unmanly” and to publicly revile them as “bums.”

Here’s a similar sentiment from another observer, trying to predict what politics will look like a decade from now:

Oh wait — that was me. I think Frum is a little more apocalyptic about this than I am, but generally speaking we’re on the same page. Both the boomers and the generation before them were enormously lucky to have started their careers in the postwar world, roughly from 1950 through 1980. Good jobs were plentiful; retirement benefits — both public and private — increased steadily; and a variety of factors kept middle-class growth high. But the beneficiaries of this good fortune, like all beneficiaries of good fortune, became convinced that they had done well solely through hard work and native talent. If today’s kids aren’t doing as well, it must be because they’re dumber and lazier.

But they’re not. They just aren’t as lucky. And the competition between the generations is likely to heat up as time goes by. Welcome to our future.