National surveys have long confirmed a stubborn public unwillingness to cut federal spending (aside from foreign aid, which people always think is much larger than it really is). Generally speaking, people support budget cuts in the abstract but oppose them when it comes to cutting specific programs.

But a recent survey pinpoints one area that’s exactly the opposite: defense spending. Not only are large numbers of both Democrats and Republicans willing to cut the Pentagon’s budget, but it 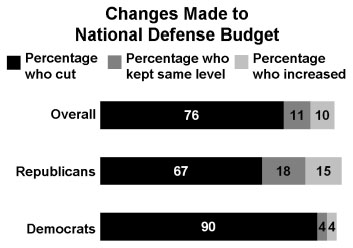 turns out that once you get into the weeds they’re even more willing to cut it:

Interestingly, when given the opportunity to specify their exact proposed level, a substantially larger  percentage made cuts than had said they would in the earlier question which offered them three approaches to dealing with the deficit (see above). In the earlier question, 62% had said they thought Congress should reduce defense spending. Among the 38% who did not select the option of cutting defense, when given the option to specify the number, half of them gave a number below 2012 levels and thus a made a cut.

I don’t imagine this will make much difference to our elected representatives, especially since I suspect that the strength of the public’s budget cutting fervor is low. It’s also likely to melt in the face of Pentagon assurances that Iran could launch a missile at New York City just as soon as they can get a ship within 600 miles of New York City. Still, this is how the public feels, and it doesn’t get much attention. Maybe it should.

Via Suzy Khimm, who has more details.