It’s unfair to spend too much time highlighting the ravings of unhinged cranks, especially if it’s done with the unstated implication that they speak for a broader political movement. But then again, sometimes it’s worthwhile to let people know just how demented things are getting out there. Here’s a small excerpt from a fundraising email sent out by the crackpots at Teaparty.org highlighting a new video from Jerome Corsi, one of the masterminds behind the 2004 swiftboating of John Kerry: 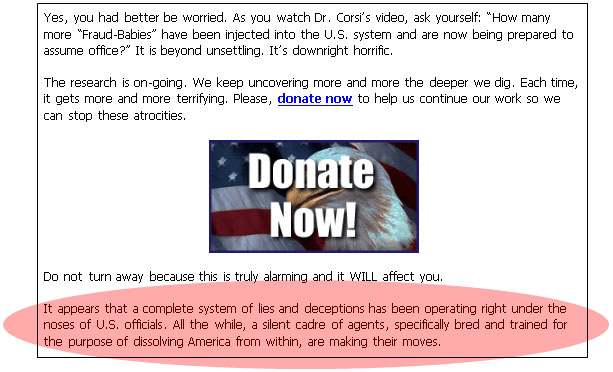 Wasn’t that the plot of Salt? Angelina Jolie really kicked some ass in that movie. I guess Corsi and the Teaparty.org folks thought it was a documentary.

Elsewhere, Steven Taylor passes along the news that certified nutcase Alex Jones doesn’t believe the mass shooting in Aurora was the act of a demented maniac, but was “planned by the Obama administration (along with Fast and Furious and the Gabrielle Giffords shooting) as a plot to let the UN take our guns away.” Perhaps Jones will ask Ron Paul what he thinks of that the next time he appears on the show.