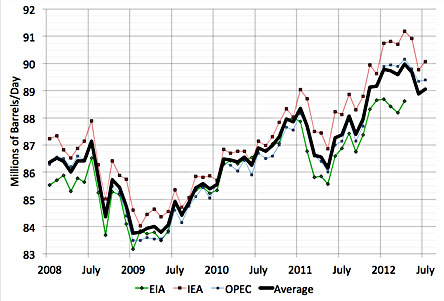 Stuart Staniford notes that oil production, which plateaued in early 2012, has since dropped off:

OPEC has revised down their numbers for June significantly and both the IEA and OPEC show very slight increases in July relatively to June. The overall effect is now that production appears to have fallen about 1mbd in June versus the plateau level that obtained from January to May, and has not recovered in July….Prices rebounded slightly in June — but nowhere near the level of earlier in the year.

It’s just one data point. No need to start tearing your hair out over it. But it’s a pretty big data point.