I don’t write about national security and civil liberties issues as much as I should. Partly this is because I find much of it too grim to bear. But it’s also because it seems so hopeless: there’s really no significant difference between the two major parties on most of these issues, and therefore no real chance of any of them being changed. There are differences at the margin — Obama banned torture and Eric Holder at least tried to institute civilian trials for terrorist suspects — and during campaign season even modest differences become magnified. But really, there’s a pretty broad bipartisan consensus on all the big stuff: drones and assassinations and secrecy and military intervention and the ever increasing role of surveillance in our society, just to name a few items.

But ignoring this stuff is a character flaw, not a rule, and today Glenn Greenwald writes about the Justice Department dropping its last investigation into Bush-era torture charges. All of the hundreds of possible cases had already been quietly scrapped years before, but until yesterday there were still two left:

The only exceptions were two particularly brutal cases, both of which resulted in the death of the detainee. One involved the 2002 abuse of Gul Rahman, who froze to 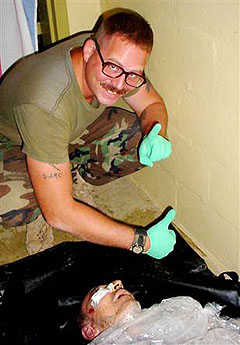 death in a secret CIA prison in Afghanistan known as the “Salt Pit”, after he was beaten, stripped, and then shackled to a cement wall in freezing temperatures.

The other was the 2003 death of Manadel al-Jamadi at Abu Ghraib, who died in CIA custody after he was beaten, stripped, had cold water poured on him, and then shackled to the wall. It was al-Jamadi’s ice-packed body which was infamously photographed with a smiling US Army Sgt Charles Graner standing over it giving the thumbs-up sign.

….Because the Obama administration has systematically blocked all other cases besides these two from any possibility of criminal charges, yesterday’s decision means that nobody in the US government will pay any price for the systematic worldwide torture regime which that nation implemented and maintained for close to a decade.

However, as Glenn points out, the Obama administration is still willing to prosecute whistleblowers who spoke out against the torture regime. This is, to say the least, not our nation’s finest moment. Or our president’s.