There are two parts to Mitt Romney’s tax plan. Here they are:

Part 2: Romney wants to eliminate or reduce various tax credits and deductions in order to increase revenue. This would make up for the lost revenue from Part 1. However, he has provided zero detail about this part of his plan.

Isn’t that odd? Romney has extremely specific thoughts about lowering tax rates and is willing to share chapter and verse. But when it comes to the part where you raise some taxes to make up for it, he suddenly thinks he ought to defer to Congress on the details instead of doing their job for them. Why is that?

The analysts at the Tax Policy Center provide a pretty good clue today. Romney himself won’t say anything about the credits and deductions he’d target, so they made the most progressive assumptions they possibly could about them by “starting at the top.” That is, they made a list of all the possible credits and deductions and then completely eliminated them for the highest income group. This would produce the largest possible tax increase for the wealthy. Then they worked their way down, and by the time they got to the bottom group they 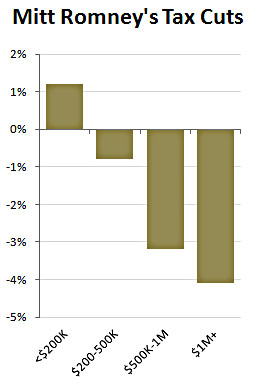 reduced the credits and deductions only enough to make the whole plan revenue neutral. This produced the smallest possible tax increase for the non-wealthy.

So: the biggest possible increase for the wealthy, the smallest possible increase for the less wealthy. For technical reasons, they could only model this down to $200,000, but that’s enough to show what Romney’s plan would do. You can see it in the chart on the right. When you combine the decrease in rates and the increase from credits and deductions, millionaires would get a tax cut of 4.1%. Everyone under $200,000 would get a tax increase of 1.2%.

At this point, President Obama’s problem is trying to get people to believe that Romney actually supports a plan that’s so outlandishly friendly to the rich. When the Priorities USA Super PAC tried to inform voters about Paul Ryan’s similar plan, Robert Draper reports that “the respondents simply refused to believe any politician would do such a thing.” And Romney, of course, will hide behind the fact that he himself hasn’t endorsed any particular basket of tax increases to make up for his rate cuts, so the Brookings analysis is just guesswork.

Still, it’s the most sympathetic analysis possible. Any other basket of credits and deductions would make things even better for the wealthy and even worse for the non-wealthy. It might be, in Jon Chait’s words, cartoonishly evil to think that any politician would actually propose such a plan, but Romney has done exactly that. The only question is whether anyone can make the voters believe it.