Supporters of plans to voucherize Medicare often point to Medicare Advantage as a model. MA providers bid for Medicare contracts and are typically paid a set amount for each beneficiary they sign up. In theory, because MA providers compete against each other (and against traditional Medicare), they have an incentive to provide 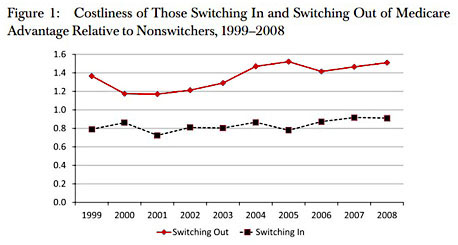 That’s debatable, but Austin Frakt points us to a new study that makes it an even more dubious claim. The chart on the right is the key evidence, and it requires a bit of explanation. For each year since 1999, it shows the average cost of patients who switch in and out of Medicare Advantage. In 1999, for example, Medicare patients who switched in to MA plans had average costs (in the previous six months) that were 80% of the average. Patients who switched out of MA plans had average costs (in the subsequent six months) that were 40% higher than average.

This same dynamic has held year after year. What it means is that, somehow, MA plans find ways to attract patients with low costs and dump patients with high costs. In other words, to the extent they provide better services for lower costs, they do it by cherry picking the healthiest patients and leaving the sickest patients for traditional Medicare.

If we switch to a fully voucherized Medicare system, as Mitt Romney and Paul Ryan would like, this would almost certainly become worse. Private plans, it turns out, aren’t really any more efficient than traditional Medicare, and would probably end up competing on the basis of ever more brutal ways of making their plans attractive to the healthy and unbearable to the sick. This does not strike me as a very appealing model.