WRAP-UP: It felt to me like Mitt Romney struggled a lot tonight. His problem was simple: he wanted to draw a clear distinction with Obama on foreign policy, but he just couldn’t because he didn’t want to seem overly bellicose. As a result, he opened up very few serious, substantive areas of disagreement. This reached 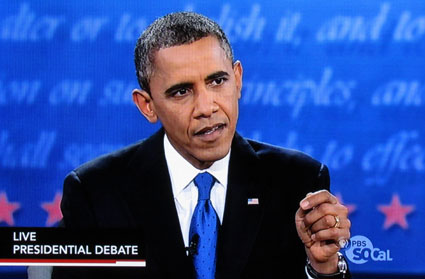 almost laughable proportions when Bob Schieffer asked him what he’d do if 2014 rolled around and Afghan troops weren’t ready to take over their own security:

Well, we’re going to be finished by 2014, and when I’m president, we’ll make sure we bring our troops out by the end of 2014. The commanders and the generals there are on track to do so. We’ve seen progress over the past several years. The surge has been successful and the training program is proceeding apace. There are now a large number of Afghan Security Forces, 350,000 that are ready to step in to provide security, and we’re going to be able to make that transition by the end of 2014.

Transcript here. Romney sounded like a cheerleader for the White House in this exchange. He didn’t even hint that Obama had mismanaged anything or done anything wrong. This is especially noteworthy since, in fact, it’s vanishingly unlikely that Afghan troops will be ready to take over in 2014.

Likewise, Romney didn’t open up any real daylight on Israel. Partly this was because Obama was so pro-Israel that he didn’t leave Romney much room on the right. But it was also partly because Romney didn’t try. Twice he mentioned that a “nuclear capable” Iran was unacceptable, but that’s a term of art that’s meaningless to most people unless it’s explained. However, Romney was content to leave it out there as a dog whistle, and neither Obama nor Schieffer followed up on it. Later, when Schieffer threw Romney a softball question about supporting Benjamin Netanyahu if he launched an attack on Iran, he punted: “Let’s not go into hypotheticals of that nature,” he said. Weak! But obviously Romney wanted to distance himself as much as possible from charges of being just another neocon warmonger.

And that wasn’t all. On Syria, Romney basically approved of Obama’s policies. On Libya, ditto, and he didn’t even try to do any political point scoring over Benghazi. (Either Candy Crowley scared him off or else he reads this blog.) He didn’t really have a different policy to offer on Egypt. Or Pakistan. Or drones. Or even Iran, though he tried. And when he got a little closer to home and tried to haul out a normally reliable Republican warhorse — Democrats are weakening our military! — Obama jumped all over it. “You mentioned the Navy, for example, and that we have fewer ships than we did in 1916. Well, Governor, we also have fewer horses and bayonets.” That was a pretty withering reply.

Overall, Obama did a very nice job of defending his foreign policy, sounding well briefed, confident, and commanding. About ten minutes in, he rattled off a five-point plan for dealing with the Middle East, and although I wasn’t especially impressed with this, I’ll bet a lot of viewers liked it — just the way they liked Romney’s crisp five-point economic plan in the first debate. Tonally, Obama did a very good job of sounding just tough enough while also emphasizing soft power capabilities, and doing it in a way that sounded credible. He even managed at times to make Romney sound almost naive about the realities of foreign policy. And when Romney accused him yet again of taking an “apology tour,” Obama had one of his best moments of the night:

If we’re going to talk about trips that we’ve taken — when I was a candidate for office, the first trip I took was to visit our troops. And when I went to Israel as a candidate, I didn’t take donors. I didn’t attend fundraisers. I went to Yad Vashem, the Holocaust museum there, to remind myself of the nature of evil and why our bond with Israel will be unbreakable.

And then I went down to the border town of Sderot, which had experienced missiles raining down from Hamas. And I saw families there who showed me there where missiles had come down near their children’s bedrooms. And I was reminded of what that would mean if those were my kids. Which is why as president, we funded an Iron Dome program to stop those missiles.

Romney looked almost pained while Obama was saying this, like a kid caught telling a whopper and getting dressed down in front of the whole class.

Romney’s main goal tonight was pretty transparent: not to sound like a warmonger. He probably succeeded in that, but at the price of turning every attack into mush and validating nearly everything Obama said. It just didn’t seem like a good night for him. I’d give him a C+ and Obama an A-.

Tonight’s debate liveblogging is brought to you by an Android tablet. Barely. The Mother Jones back end really, really doesn’t want me to do this. But let’s try it for a while just for fun. Let the games begin….

7:31 – Romney wants peace. Really. Then he’s back to domestic economic policy. He gave foreign policy even less of a nod than Obama did.

7:30 – Closing statements! Romney wants to take us back to a foreign policy that’s “wrong and reckless.” And that’s a wrap on foreign policy. Now we’re back to domestic economic policy. Good foreceful wrap-up.

7:29 – Romney loves teachers again. And yet again. Schieffer: “I think we all love teachers.”

7:27 – Romney, as usual, is good when he criticizes Obama’s economic performance over past four years. Sounds a little tired, though.

7:25 – Obama: “You keep on trying to airbrush history.” Good line, but I’m still not sure that arguing about Detroit is worthwhile. I guess it’s all about Ohio.

7:24 – Yes, let’s have another argument about the Detroit bankruptcy. Please.

7:22 – Obama makes point that Chinese currency has strengthened lately. True. Not sure anyone will really understand the point, though. Would have worked better if Obama had explained a bit more and taken credit for it.

7:19 – Romney blathering on about China being a currency manipulator. See Krugman on this. Romney is convinced that nothing he does will invite any retaliation. Uh huh.

7:18 – Romney just gratuitously announces that the world’s greatest threat is a nuclear Iran. Where did that come from?

7:17 – Romney probably right on the merits of the tire tariffs. But probably wrong on the politics.

7:16 – Obama talking about tough he’s been on China. Finally, a chance for Romney to be even tougher. Will he take it?

7:14 – Schieffer is certainly keeping to his schedule. No missing pods for him.

7:11 – Ah, a question about drones. Romney’s answer is unsurprising: he’s all in favor of using them. Zero daylight between him and Obama. Somewhere Glenn Greenwald is tearing his hair out.

7:10 – Romney: “I don’t blame the administration for the fact that the relationship with Pakistan is strained.” Again, Romney sounds like he’s in the spin room defending Obama.

7:04 – WTF? Romney on Afghanistan sounds like he’s Obama’s Secretary of Defense. Everything is working great, our boys will be home by 2014. Wow.

7:01 – Obama hitting Romney hard tonight. Generally, though, both candidates are less aggressive toward each other than in second debate.

9:59 – Would you support Israel if they bombed Iran? Romney won’t answer a hypothetical. This is Moderate2 Mitt. What will Bill Kristol think?

9:57 – Obama hitting it out of the park responding to Romney’s apology tour nonsense.

9:54 – Romney trying to sound tougher than Obama while offering nothing that Obama hasn’t done. One exception (maybe) is that he wouldn’t allow Iran to achieve “nuclear capability.” Will Schieffer follow up?

9:52 – Obama making point that sanctions only work if everyone agrees to them. This is an important thing to get across. Voters need to understand just how successful and persistent he’s been on Iran.

9:51 – Overall, we’re mostly seeing Moderate Mitt tonight. He sure sounds like he basically supports everything Obama has done on Iran.

9:50 – Did Romney just say he’d indict Ahmadinejad at the Hague?

9:48 – Romney won’t allow a “nuclear capable” Iran. Will Schieffer follow up to make clear what this means?

9:47 – Obama is claiming that the foreign policy differences between him and Romney are pretty small. That’s true, actually.

9:45 – Should we say that an attack on Israel is an attack on the United States? Obama: “I will stand with Israel if they are attacked.” Not formally an answer, but close enough.

9:44 – Obama: “We also have fewer horses and bayonets.” Pretty good line. Not sure this exchange can have a winner, though.

9:43 – Romney finally willing to talk about military, but hauls out nonsense about our Navy being smaller than anytime in the past century. Sheesh.

9:41 – Finally back on the military budget. Will Romney now be willing to actually talk about the military?

9:39 – Bob Schieffer completely unable to get Romney back onto foreign policy.

9:33 – Oh for God’s sake. Can we please stop talking about our domestic economic plans on the pretext that this is really a foreign policy issue?

9:27 – Romney just attacked “sequestration” without explaining what it is. That’s how you lose your audience.

9:22 – Romney has a whole lot of goals for Syria but precisely no plans for achieving them.

9:19 – Romney wants to form a “council” in Syria? He’s otherwise being very non-belligerent on Syria.

9:17 – So far, Obama pandering to Israel more than Romney.

9:11 – Obama really going after Romney’s inconsistencies. Not sure he really made the point convincingly.

9:10 – Romney has now mentioned Mali twice. Is this the latest Republican thing?

9:08 – Romney: “My strategy is pretty straightforward, which is to go after the bad guys.” Okey dokey.

9:05 – Kinda looks like Moderate Mitt so far. But the night is young.

9:00 – So which Mitt will we get tonight? “Red line” Mitt or Moderate Mitt? Or something in between?