Adam Serwer has a pretty interesting chart today that accompanies his piece about the history of attacks on U.S. diplomatic targets. Here it is: 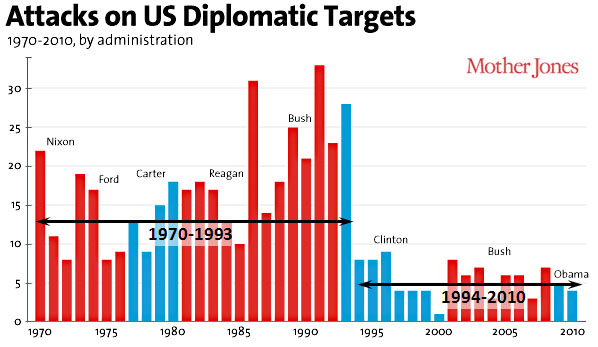 “That follows the trend of terrorism generally,” says Erin Miller, a research assistant at START who manages the Global Terrorism Database. “In the early 1990s there’s a drop-off worldwide in terrorism against pretty much all target types.” Miller cites the collapse of the Soviet Union, and a subsequent wane in leftist terrorism as one possible explanation for the downturn beginning in the mid-1990s.

Still, it’s fair to say that the Obama administration has hardly distinguished itself with its curiously meandering response to the Benghazi attacks. I think they’ve finally given up on the suggestion that it was all because of a YouTube video, but beyond that there’s still a fair amount of confusion about who was behind the attack and what the motivation was. Weakness may not have caused the attacks, but until Obama can get his hands around it, it’s going to remain a pretty soft spot for the Romney campaign to poke at.