I’m a little tired of the whole “fiscal cliff” meme, but I suppose we all blog about the news we have, not the news we wish we had. And today, the Washington Post informs us that if 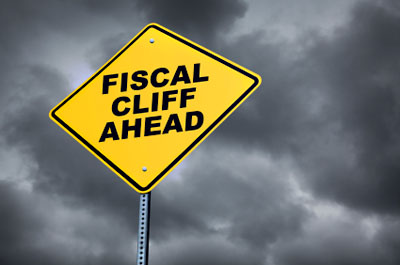 President Obama is reelected he’s going to go medieval on House conservatives who refuse to extend the Bush tax cuts for the middle class unless tax cuts for the rich are included in the package:

Freed from the political and economic constraints that have tied his hands in the past, Obama is ready to play hardball with Republicans, who have so far successfully resisted a deal to tame the debt that includes higher taxes, Obama’s allies say.

In the days after the November election, the tables will be turned: Taxes are scheduled to rise dramatically in January for people at all income levels, and Republicans will be unable to stop those automatic increases alone.

….Some Republicans — such as Sen. Jim DeMint (R-S.C.), a tea-party favorite — have conceded that an Obama election victory would amount to a mandate to raise the top rates. But [John] Boehner recently ruled out that idea, and senior GOP aides say letting the top rate rise, even briefly, above 35 percent is a line party leaders cannot cross.

This is a scenario that Jon Chait has been writing about for quite a while. On December 31, he thinks, Obama can simply let the Bush tax cuts expire and then start with a clean slate. At that point, Obama is the one with all the leverage:

On January 1, 2013, we will all awake to a different, substantially more liberal country. The Bush tax cuts will have disappeared, restoring Clinton-era tax rates and flooding government coffers with revenue to fund its current operations for years to come. The military will be facing dire budget cuts that shake the military-industrial complex to its core.

….All this can come to pass because, while Obama has spent the last two years surrendering short-term policy concessions, he has been quietly hoarding a fortune in the equivalent of a political trust fund that comes due on the first of the year. At that point, he will reside in a political world he finds at most mildly uncomfortable and the Republicans consider a hellish dystopia. Then he’ll be ready to make a deal.

Leading up to the New Year, there will be a concerted effort to preempt this policy shift, by bringing the two parties together to consummate a version of the endlessly touted (but little-understood) Bowles-Simpson agreement that GOP House members rejected….

Chait believes that Obama will refuse to make a Bowles-Simpson-ish deal during 2012 because he knows that his leverage will be far greater once the Bush tax cuts are finally gone. “I know what Obama-land looks like when it’s under the spell of bipartisan delusions,” he says, and after the gut punch the White House took during the debt ceiling fiasco, he’s convinced they’re no longer under any delusions about Republican obstructionism. So this time, Obama will just wait calmly until January 1st, and then let Republicans twist in the wind if they refuse to negotiate. Eventually they will, and Obama will win because he holds all the cards.

Maybe! Obviously this scenario depends on Obama winning reelection, but it also depends on Democrats holding firm. If Republicans can peel off a few centrist Dems in the Senate and pass some kind of deal, Obama might be hard pressed to hold out. Nonetheless, I think Chait is basically right. A freshly reelected Obama has little reason to waste time negotiating in December (though he’ll probably have to pretend just for the sake of form), when he knows that January produces a whole new ballgame. And unlike 2010, when the economy was fragile and January heralded a new Republican majority, 2012 will be just the opposite.

Republicans won’t concede on taxes unless their backs are to the wall and they no longer have any choice. Obama probably gets that. We can all hope, anyway.