All the talk on CNN seems to be about how Obama “looked like he didn’t want to be there.” I didn’t really see that myself. Obama certainly wasn’t crisp, which I find a little inexplicable, but that’s about the worst I saw.

Did Romney come armed with “loads of details”? Not even close. He certainly made an endless number of points, but there weren’t really many facts and figures there. Just a flurry of words. And that old Romney weirdness made a few appearances too. For example, this bit about what he’d cut from the budget: “I’m sorry, Jim, I’m going to stop the subsidy to PBS. I’m going to stop other things. I like PBS. I love Big Bird. Actually I like you, too.”

My sister emailed during the debate to ask, “Can Romney look any more insulting when he’s listening to Obama? It’s like he’s looking at an idiot child.” Romney’s normal debate face strikes me the same 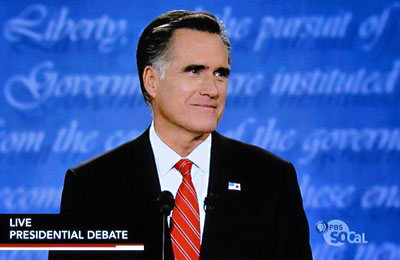 way, but I don’t know if it strikes everyone that way. Judge for yourself on the right.

Andrew Sullivan is beside himself: “This was a disaster for the president for the key people he needs to reach, and his effete, wonkish lectures may have jolted a lot of independents into giving Romney a second look. Obama looked tired, even bored; he kept looking down; he had no crisp statements of passion or argument; he wasn’t there. He was entirely defensive, which may have been the strategy. But it was the wrong strategy. At the wrong moment.” I’ll chalk that up to Sullivan’s mercurial temperament, but now that I’m listening to the talking heads, it seems like there’s a pretty fair consensus that Obama lost by a bunch. I’ll stick to my guns on this: I think Obama lost by a little, but not by much.

Matt Yglesias tweets: “It’s interesting that conservatives who think they don’t want Mitt to pivot to the center are clearly elated when he did it and it worked.” That’s true. Romney repeatedly noted that he agreed with Obama on various issues and repeatedly took rhetorically moderate positions. For example: “Regulation is essential. You can’t have a free market work if you don’t have regulation.” You sure wouldn’t have heard him say that during one of the primary debates.

I didn’t see this myself, but Ed Kilgore reports that the CBS instapoll has Romney winning by 46-22. Ouch. Looks like the talking heads called it better than me.

Noodling a little more about this, I think my disagreement with the media consensus is more over Romney’s performance than Obama’s. I agree that Obama didn’t bring his A game. But I didn’t think Romney was all that good either. Yes, he attacked, but he did it in a curiously hyperactive way, constantly insisting on getting in one more rebuttal and then using it to go over every single point that Obama had just made. I thought that was both confusing and exhausting. Romney also made frequent references to things that Beltway junkies understand but ordinary viewers probably didn’t. The “accounting treatment” for oil companies, for example, or jumping into a point about Dodd-Frank without explaining what Dodd-Frank is. And for what it’s worth, I suspect that Romney won’t do well in the post-debate fact checks either. It won’t be the disaster that Paul Ryan’s convention speech was, but he seemed pretty clearly a little faster and looser with the truth than Obama was.