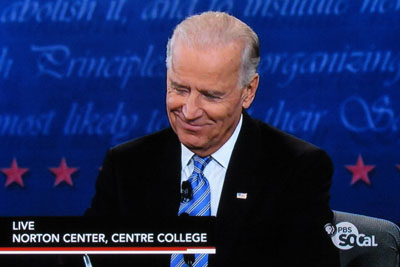 Vice President Joe Biden spent most of his 90-minute televised showdown with Paul D. Ryan on Thursday night looking like he was having the time of his life….You almost expected him to prop his feet up and say, “Sonny, you just keep tellin’ ’em.”

….Intimacy is just what Biden wanted. Smiling and more than occasionally laughing in apparent disbelief when Ryan spoke, flatly correcting him, repeatedly contradicting him and often interrupting him, Biden often seemed like he was sharing a joke with the audience. “That’s a bunch of malarkey,” he said early on when Ryan accused the Obama administration of misleading the public about the nature of the attack on the U.S. diplomatic mission in Libya.

Conservatives seem to have decided that they’re going all-in on Biden’s demeanor as their primary point of attack, and this provides us with an excellent field study of working the refs. As near as I can tell, the general reaction last night was that Biden was pretty good: loose, aggressive, passionate, and taking no guff from Ryan. At worst, maybe he overdid things a bit, but that’s all.

Question: will that consensus change as conservatives continue to hammer relentlessly on their theme that Biden was rude, condescending, obnoxious, creepy, unbearable, etc. etc.? I suspect it will, though perhaps less so than it would have a few years ago. Nonetheless, the right-wing reality-distortion machine is still pretty strong. This will certainly be a bigger topic of conversation today than it deserves to be.