There are a bunch of technical reasons why climate change made Hurricane Sandy worse than it would have been, but Chris Mooney reports today that there’s also a very simple reason: global warming has raised sea levels by about eight inches over the past 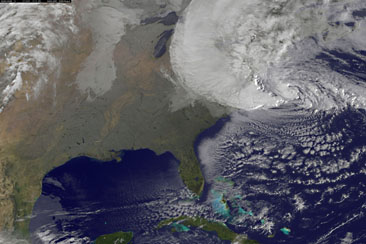 century, and this means that when Sandy swept ashore it had eight extra inches of water to throw at us.

It turns out, eight inches matters a lot. First of all, using Climate Central’s Surging Seas tool, [meteorologist Scott] Mandia estimated that 6,000 more people were impacted for each additional inch of sea level rise….Moreover, there is also reason to think that the second inch, so to speak, is worse than the first one. That’s because of basic physics. Water flowing atop a surface—say, a New York City street—has its energy sapped by the friction of dragging along that street. However, if the water level is higher, it’ll flow faster, because the water higher above the surface experiences less friction. “If you had an inch of water running down the street, you’d see all kinds of turbulence in it, which is basically energy being lost,” Strauss explains. “But if the water were a foot above it, you’d see more sheet-like movement, which is a more powerful motion.”

Speed matters a great deal in the context of a storm surge, because the surge is only temporary and will recede. So how far it penetrates before doing so is partly a function of its speed.

And there are still more reasons to think that increasing the size of a storm surge by eight inches really matters. Consider the US Army Corps of Engineers’ “depth-damage” functions, which the Corps uses to study how much flood damage grows with an increasing water level. The upshot here, says Mandia, is that “the damage is exponential, it’s not linear.”Or in other words, as the water level increases, the level of damage tends to rise much more steeply than the mere level of water itself.

So that’s that. No shilly shallying. No caveats. “There is 100 percent certainty that sea level rise made this worse,” says sea level expert Ben Strauss. “Period.”

And by the way, this is also why climate change is so much worse for a place like Bangladesh than it is for us: they have an enormous amount of very low-lying territory. They can adapt to a small, slow rise in sea level during normal times, but they can’t adapt to the fact that monsoons become exponentially worse when sea level is higher. That extra eight inches turns into millions of tons of extra water, all delivered within a few hours to a place with nowhere near the infrastructure to handle it. So when you think about sea level rise, don’t think about the shoreline advancing a bit and forcing people to move slightly farther inland. Think instead of storms and the extra millions of tons of water it delivers. That’s climate change, and that’s about as concrete as it gets.