The Washington Post, in a piece about how President Obama’s national security team is likely to shake out in the wake of David Petraeus’s departure and the expected resignation of Hillary Clinton, says that Susan Rice is his top pick to take over the State Department. But there might be trouble brewing:

Rice, one of an inner circle of aides who have been with Obama since his first presidential campaign in 2007, is under particular fire over the Benghazi incident, in which U.S. Ambassador J. Christopher Stevens and three other Americans were killed.

Some Republican lawmakers have suggested that she was part of what they suspect was an initial election-related attempt to portray the attack as a peaceful demonstration that turned violent, rather than what the administration now acknowledges was an organized terrorist assault.

Rice’s description, days after the attack, of a protest gone wrong indicated that she either intentionally misled the country or was incompetent, Sen. Lindsey O. Graham (R-S.C.) said Sunday. Rice, he said, “would have an incredibly difficult time” winning Senate confirmation as secretary of state.

But several White House officials said Obama is prepared to dig in his heels over her nomination to replace Hillary Rodham Clinton, who has long said she will serve only one term.

I hope Obama does dig in his heels over this if he really thinks Rice is the right person for the job. The Republican freakout over Benghazi has been shameful, and their insane scapegoating of Rice’s appearances on the Sunday chat shows a week after the attacks has been doubly so. Republicans—aided and abetted at times by reports in the mainstream media—decided to pretend that Rice had blamed the Benghazi attack entirely on a YouTube video, which they took 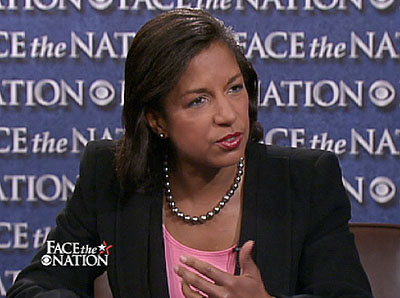 as dark evidence of a coverup designed to protect Obama. But the truth is that Rice flatly did nothing wrong, a point that bears repeating. She did nothing wrong. Here’s an instant replay of what happened, which I originally posted three weeks ago:

Graham and the rest of the Republican caucus appear to still be in election season attack dog mode, and it’s time for this to stop. They have every right to investigate Benghazi, which might very well have been handled poorly in some respects and which might have been a case of poor anticipation of an attack that should have been expected. But Rice’s conduct was fine. She very carefully, and very professionally, passed along what was, at the time, the considered judgment of the intelligence community. Some of it was wrong, but there was no coverup. There was just new information and new analysis over time, which is exactly what you’d expect following an incident like this. It’s long past time for conservatives to acknowledge this.