You may have heard about the internal problems at FreedomWorks, one of the country’s biggest tea party groups. Long story short, CEO Matt Kibbe (you’ve probably seen his porkchop sideburns on TV) had a falling out with Dick Armey (one of Newt Gingrich’s hatchet men during the Republican Revolution of 1994) over 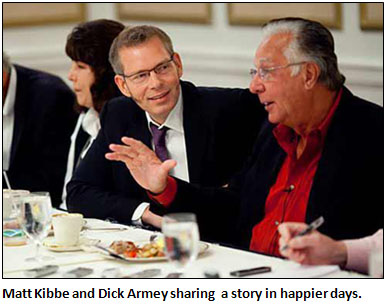 issues that Armey called “matters of principle.” Armey eventually received an $8 million golden parachute and is no longer with the organization. But it turns out that Armey’s departure was a wee bit more melodramatic than we thought. The Washington Post reports:

The day after Labor Day, just as campaign season was entering its final frenzy, FreedomWorks, the Washington-based tea party organization, went into free fall. Richard K. Armey, the group’s chairman and a former House majority leader, walked into the group’s Capitol Hill offices with his wife, Susan, and an aide holstering a handgun at his waist. The aim was to seize control of the group and expel Armey’s enemies: The gun-wielding assistant escorted FreedomWorks’ top two employees off the premises, while Armey suspended several others who broke down in sobs at the news.

….Until this year, the partnership between Kibbe and Armey worked well….The partnership came to a crashing end when Armey marched into FreedomWorks’s office Sept. 4 with his wife, Susan, executive assistant Jean Campbell and the unidentified man with the gun at his waist — who promptly escorted Kibbe and Brandon out of the building.

….By nearly all accounts, including from those loyal to him, Armey handled his attempted coup badly. Armey says he was stepping in because of ethical breaches by Kibbe and Brandon, accusing them of improperly using FreedomWorks staff resources to produce a book — ironically, named “Hostile Takeover” — for which Kibbe claimed sole credit and was collecting royalties. The use of internal resources for Kibbe’s benefit could jeopardize the group’s nonprofit tax status; the group denies ay impropriety.

I guess we know one thing for sure: Dick Armey believes in the right to keep and bear arms. You never know when you might need to lead an armed coup against your employer, after all.