The absurdities of the fiscal cliff continue apace. Here is Mitch McConnell, master of the absurd:

“Nothing can move forward in regards to our budget crisis unless Speaker Boehner and Leader McConnell are willing to participate in coming up with a bipartisan plan,” Reid said. “So far, they are radio-silent.”

McConnell retorted that Republicans have been eager to work with Obama. After one-on-one talks between Obama and Boehner failed to produce a broad deficit-reduction package last week, McConnell said it is now the president’s responsibility to put forward a new plan. “Republicans bent over backwards,” he said. “We wanted an agreement. But we had no takers. The phone never rang.”

….Boehner’s message was that “we were going to wait for the Senate to take up the bill that we passed six months ago,” said one Republican 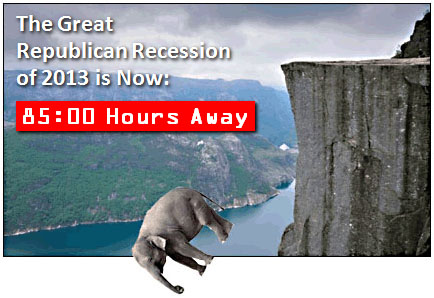 lawmaker who was on the call. “Quit trying to do this leadership-negotiating thing.”

But maybe “one Republican lawmaker” has the right idea. Why bother negotiating with McConnell, who so far has shown no inclination to want responsibility for anything? Maybe Obama and Reid should simply come up with a modestly different package than the most recent Democratic proposal and see if they can round up seven Republican votes for it. The Maine twins might vote for it. Lugar’s retiring, so he might vote for it. Murkowski could maybe be bought off. Scott Brown wants some centrist cred for his next Senate run, so he might vote for it. Maybe a bit of old-fashioned horsetrading could put together 60 votes.

(Needless to say, 60 votes will be necessary, since Mitch McConnell certainly won’t forego a filibuster of anything that Obama proposes. He’s not willing to bend that far backward.)

After that, who knows? Maybe a bill with no fingerprints on it from the GOP leadership could pick up a couple dozen Republican votes in the House if Boehner allows it to come to the floor, as he’s promised. You never know.

It’s a long shot. But I wonder if it’s any more of a long shot than continuing to engage with Boehner and McConnell, both of whom are obviously scared to death of doing anything other than simply rejecting every proposal Obama puts forward and then accusing Obama of “not being serious”?