The American economy added 155,000 new jobs last month, but about 90,000 of those jobs were needed just to keep up with population growth, so net job growth was closer to 65,000 jobs. This was about the same as November. The headline unemployment number remained steady at 7.8 percent, the same as November’s revised estimate.

For reasons that remain obscure—and might just be a coincidence—the American economy is now in its third straight years of growing modestly except during the summer, when it stagnates for a few months. As a result, I’d say we’re now living in the worst of all possible worlds: growth isn’t high enough to really kick the economy into high gear, but it’s not low enough to scare Congress into doing something serious about it. Instead, they just obsess over the deficit. That might be appropriate if we were consistently adding 200,000 net new jobs a month, but it’s just plain dumb right now. 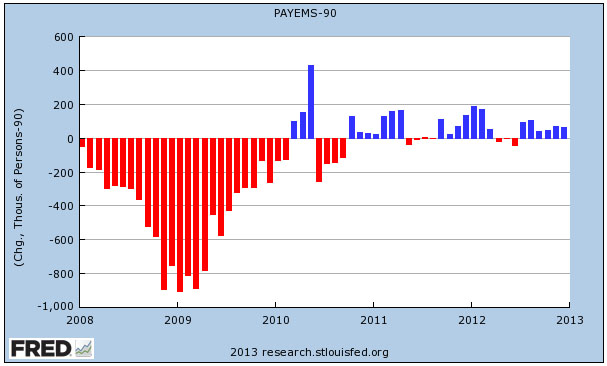