I think I’m going to file this under “too good to check.” Apparently, being just a little bit overweight may be good for you:

The scientists [] found that people classified as overweight, with a BMI of 25 to 29.9, died at slightly lower rates — not higher — than those of so-called normal weight….Study lead author Katherine M. Flegal, an epidemiologist with the Centers for Disease Control and Prevention, said she and her 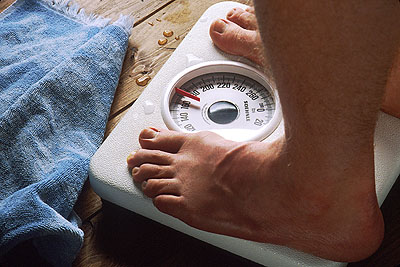 colleagues could not say what lay behind the apparent survival edge for overweight people.

….But there also could be real reasons why carrying extra pounds could confer a survival advantage. Fatter people are not as prone to osteoporosis and have more padding to protect the bones should a patient take a tumble, lowering the risk of a life-endangering hip fracture. And carrying extra fat provides energy reserves in cases of a severe illness. Doctors know, for example, that plumper patients with heart failure or kidney failure do better than their leaner peers, and there could be other situations in which the same thing is true.

Usually I like to take a look at the actual study, rather than just trusting a news account, before I blog about it. But I think I’ll pass this time. After all, my BMI is currently at a pleasantly plumpish 28, and I rather like the idea that this may actually be ideal. If your New Year’s resolution was to shed a few pounds, perhaps this study is reason enough to declare victory today and then forget about it until next year.

POSTSCRIPT: Please spare me any comments about how BMI is an imperfect measure because people with lots of muscle mass can end up with high scores even though they aren’t packing on much fat. That’s true of lots of NBA athletes, but it’s not true of most of the rest of us. For the 99%—which includes me and probably includes you too—BMI works just fine.