The Wall Street Journal reports that the shale gas boom is going to last for decades:

The most exhaustive study to date of a key natural-gas field in Texas, combined with related research under way elsewhere, shows that U.S. shale-rock formations will provide a growing source of moderately priced natural gas through 2040, and decline only slowly after that. A report on the Texas field, to be released Thursday, was reviewed by The Wall Street Journal.

….Looking at data from actual wells rather than relying on estimates and extrapolations, the study broadly confirms conclusions by the energy industry and the U.S. government, which in December forecast 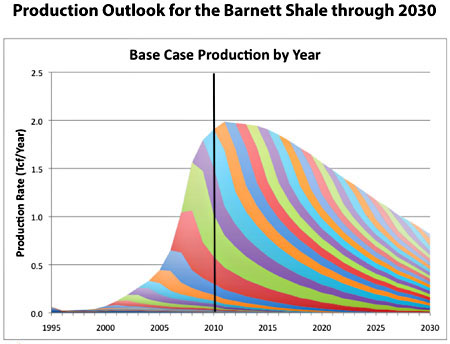 rising gas production. “We are looking at multi, multi decades of growth,” said Scott Tinker, director of the Bureau of Economic Geology at the university and a leader of the study.

I don’t have access to the study of the Texas field, let alone the “related research” on other shale gas fields, but the press release from the University of Texas does include the chart on the right, which suggests that the Barnett field peaked last year and is now in decline. In 15 years it will be producing at half its peak rate.

But that’s still a lot of shale gas between now and 2050, when the field will be exhausted. And it’s going to require drilling a lot more wells along the way, since individual wells tend to produce for only a short time. Given this, it sure would be nice to work out the possible environmental damage of shale fracking on air and groundwater now, instead of waiting until 2030 or so, when it will be too late.