Steven Brill has a gigantic cover story in Time this week about one of my pet healthcare peeves: the simply insane prices that hospitals charge uninsured patients. We often talk about American healthcare prices being 50 percent or 100 percent or even 150 percent higher than in other developed countries, and that’s obviously a serious public policy problem. But those are 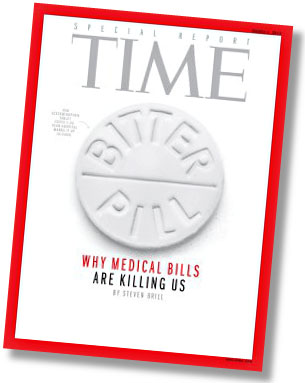 Why? You’d think there would be some answer more sophisticated than “because they can,” but that’s about the size of it. Most people who come to the emergency room have no choice and no bargaining power. Hospitals can, almost literally, charge them whatever they feel like. And as Brill documents meticulously, they do. They’re not eager to talk about it, either. As one hospital spokesman told Brill when he asked to see the “chargemaster” price list used to bill uninsured patients, “Most people never pay those prices….So I’m not sure why you care.” Faced with an actual bill, he got annoyed: “I’ve told you I don’t think a bill like this is relevant. Very few people actually pay those rates.”

And of course, that’s true. Few people do pay those rates. But it’s a scandal nonetheless that the most vulnerable possible group of people you can imagine—uninsured patients with emergency problems—are routinely gouged by hospitals just because they can.

Obamacare will help when it kicks in next year because more people will be covered by commercial insurance. More could be done by either covering everyone or else mandating competitive rates even for the uninsured. Unfortunately, as Matt Yglesias says, Brill shies away from the obvious conclusion of his own research:

For reasons I do not understand after having read the conclusion twice, Brill rejects both of these ideas in favor of meaningless tinkering around the edges. He wants to alter medical malpractice law, tax hospital operating profits, and try to mandate extra price transparency. That’s all fine, but it’s odd. His article could not be more clear about this—health care prices are high in America because, by law, we typically allow them to be high. When foreigners force prices to be lower, they get lower prices. When Americans force prices to be lower (via Medicare), we get lower prices. If we want lower prices through new legislation, the way to get them is to write laws mandating that the prices be lowered.

Read the article anyway, though you might want to have your blood pressure meds handy when you do. Just don’t pay any attention to Brill’s policy recommendations. That part is all wet.