The American economy added 236,000 new jobs last month, but about 90,000 of those jobs were needed just to keep up with population growth, so net job growth was closer to 146,000 jobs. That’s not bad. The headline unemployment number went down to 7.7 percent, also not bad.

On a slightly less cheery note, the December jobs number was revised upward by 24,000 jobs but the January number was revised downward by 38,000 jobs. In addition, February’s low unemployment number was partly due to a declining labor participation rate, which continued its long slide from a high of 67.3 percent in 2000 to 63.5 percent last month.

In other words, mixed news, though generally better than in the past year. But we haven’t yet seen the effects of the sequester. That’s likely to have a noticeable and negative impact on new job creation over the next six months. Fasten your seat belts. 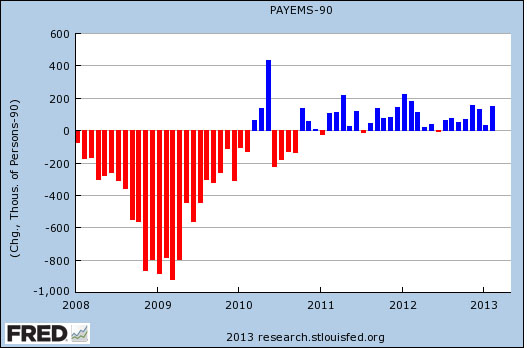