Friday Catblogging isn’t the only thing that’s 10 years old this month. It’s also the 10th anniversary of the Iraq War. However, if I’m going to memorialize anything about this, I figure I should memorialize the 10th anniversary of when I finally came to my senses about the war. It happened on March 8, 2003, after we learned that documents showing that Saddam Hussein had tried to buy uranium yellowcake from Niger were forged. And not just forged, but forged so badly as to be jokes. Here’s my mea culpa:

For a variety of reasons related to post-war planning and Bush’s seeming indifference about tearing down international institutions in order to get his way, I’ve been on the fence about war with Iraq for several weeks now. Basically, I figured that all it would take is one more thing to send me into the anti-war camp, and I think this is it. If we’re planning to start a war 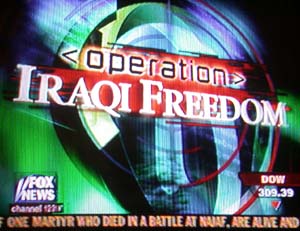 based on intelligence from the same guys who made this mistake, it’s time to take a deep breath and back off.

The next day I explained a little more about what I meant by “a variety of reasons related to post-war planning”:

Originally, my skepticism about Bush’s goals was due to the fact that he never spoke about them. Then, over the past couple of weeks, when he started addressing the problem, he just made things worse. First a “blueprint” for a military occupation was presented to Congress, but it reassured no one with its vision of a U.S. military governor and a solidly U.S. occupation force. Then there was his AEI speech, where he had a chance to rally the country behind a long-term vision, but instead just spoke a few platitudes and promised that we’d get out as soon as possible. Then there was the sellout of the Kurds. And the decision that we wouldn’t support any kind of federal government in Iraq.

….Put all this together with things like Paul Wolfowitz’s fanciful testimony before Congress last month and it’s simply become wishful thinking to believe that Bush is really committed to any kind of serious effort to promote democracy in Iraq…Without that, the war isn’t worth it. Saddam’s direct threat to the U.S. is marginal, and while I’d rather get rid of him now instead of later, I don’t think it’s worth the risk if we do it by demolishing the collective security system that, flaws and all, has served us pretty well for the past 50 years.

Paul Wolfowitz’s “fanciful” testimony before Congress, of course, had come a week earlier, when he told Congress that Eric Shinseki’s postwar troop estimates were “wildly off the mark”; that there was no history of ethnic strife in Iraq; that Iraqi civilians would welcome an American-led liberation force; that “even countries like France will have a strong interest in assisting Iraq in reconstruction”; and that published estimates of the costs of war and rebuilding were way too high. It was an epic tour de force of wrongness, quite possibly the wrongest war prediction since Allied generals figured that troops would be “home by Christmas” after the start of World War I.

So why, to my eternal regret, did I support the war in the first place? The truth is that it’s been so long I have a hard time remembering. Part of the reason is that at that point I had been blogging for only a few months, and before that I simply hadn’t given a great deal of thought to questions of when military intervention was justified. That made me an easy mark, I suppose. I also recall that I was strongly influenced by Ken Pollack’s The Gathering Storm, one of the ur-texts of liberal hawkishness. Beyond that, I also underestimated just how badly the Bush administration was lying to us and how inept their postwar occupation planning was. In retrospect, none of that should have made a difference: The war was a bad idea, full stop, regardless of how competent the Bush administration’s planning was. At the time, though, it made a difference to me.

On March 8, 2003, I obviously didn’t know that the forged Niger documents would one day become a scandal in their own right during the Valerie Plame affair. All I knew was that it was the last straw. So I turned.

But you know what surprises me the most about all this? The fact that so few people did, in the end, change their minds about the war. I have the same sense of astonishment over the 2008 financial crash. Both of them were epic disasters, and yet very few people, especially on the right, saw them as catastrophes that might require them to revisit their views on military intervention and financial regulation respectively. But if those two things don’t cause you to update your priors, what will?