In a significant shift in fiscal strategy, Mr. Obama on Wednesday will send a budget plan to Capitol Hill that departs from the usual presidential wish list that Republicans typically declare dead on arrival. Instead it will embody the final compromise offer that he made to Speaker John A. Boehner late last year, before Mr. Boehner abandoned negotiations in opposition to the president’s demand for higher taxes from wealthy individuals and some corporations.

Congressional Republicans have dug in against any new tax revenues after higher taxes for the affluent were approved at the start of the year. The administration’s hope is to create cracks in Republicans’ antitax resistance, especially in the Senate, as constituents complain about the across-the-board cuts 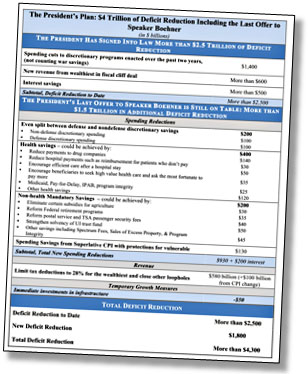 in military and domestic programs that took effect March 1.

It’s not clear precisely what this means, but it sounds as if it mostly embodies the president’s sequester-replacement plan that’s been on offer for the past two months, which includes about $1.1 trillion in spending cuts over ten years and $700 billion in new revenue. Among other things, this plan offers to cut Medicare by reducing reimbursement levels and cut Social Security by adopting chained CPI. Presumably, however, it will present those cuts in considerably more detail than Obama has done before.

This will be an interesting test of the theory that one of the things preventing a deal has been simple Republican ignorance of what Obama has offered. Once these things are in the official budget, there’s simply no way to ignore them. They’ll get a ton of coverage—including massive outrage from the liberal base—and there will be enough detail that even Bill O’Reilly should be satisfied that Obama is offering a “real plan.” The fact that Obama is proposing serious cuts in entitlements will finally be impossible to ignore.

Will this pave the way for a deal? I have my doubts, because I never thought that ignorance was truly a roadblock. Any Republican paying even minimal attention knew what Obama was offering earlier this year, and the ones not paying minimal attention simply didn’t want to know. Their ignorance was mostly a deliberate strategic choice: it allowed them to continue railing against Obama without having to engage with the facts of what he was offering, and that was pretty convenient for most of them. This option will be taken away next week, but since it was never the true roadblock, they’ll simply switch to other objections.

At least, that’s my guess. As a strategy to change the media narrative, this might work, but as a strategy to change Republican priorities, it won’t. It will simply be the latest in a long line of preemptive concessions, none of which have worked before. Republicans will treat the spending cuts as a new baseline to negotiate down from, while treating the revenue increases as dead on arrival.

But I might be wrong! Certainly it will change the tone of the conversation, and the more outraged liberals get about this the better it will be for Obama. Next week we’ll start to find out.

UPDATE: It turns out we don’t have to wait until next week after all. All we have to do is read Politico right now:

House Speaker John Boehner immediately dismissed President Barack Obama’s package of significant new entitlement cuts tied to new tax revenues, calling them “no way to lead and move the country forward…..Boehner said he will not consider new revenues as part of the deal, arguing that “modest” entitlement savings should not “be held hostage for more tax hikes.”

Quite a shocker, no?