So-called universal banks such as Bank of America Corp., Citigroup Inc. (C) and JPMorgan Chase & Co. (JPM) are trading at a 25 percent to 30 percent discount to more-focused competitors, analysts led by Matthew H. Burnell wrote in a research report today.

….“Given the challenges posed by increasing regulation, higher capital requirements, and well-publicized trading/market challenges, it’s not surprising that investors remain reluctant to assign a ‘full’ valuation to the universal banks,” the analysts wrote. “If regulators and/or legislators don’t demand it, shareholders could 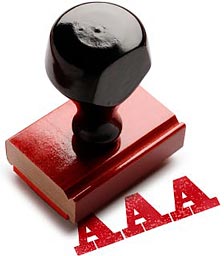 also intensify demands to ‘break up the banks.’ ”

As capital requirements become more stringent, big banks need to do something to improve their capital ratios. One way to do this is to accumulate more capital. Alternatively, since the ratio in question is capital / assets, you can reduce your asset base. And since safer assets require less capital, one way to do this is to sell off your risky assets and replace them with safer assets.

Unfortunately, as the Wells Fargo report points out, this reduces your potential profits and makes investors sad. So instead of actually improving the safety of your asset base, maybe it would be better if you could just pretend to improve the safety of your asset base? In other words, why not engage in some good old-fashioned regulatory arbitrage instead? Here’s the New York Times today:

Banks have been shedding risky assets to show regulators that they are not as vulnerable as they were during the financial crisis. In some cases, however, the assets don’t actually move — the bank just shifts the risk to another institution.

This trading sleight of hand has been around Wall Street for a while. But as regulators press for banks to be safer, demand for these maneuvers — known as capital relief trades or regulatory capital trades — has been growing, especially in Europe.

….The buyers are typically hedge funds, whose investors are often pensions that manage the life savings of schoolteachers and city workers. The buyers agree to cover a percentage of losses on these assets for a fee, sometimes 15 percent a year or more.

….Some regulators say they are concerned that in some instances these transactions are not actually taking risk off bank balance sheets….Critics point to other reasons to worry. Most of these trades are structured as credit-default swaps, a derivative that resembles insurance. These kinds of swaps pushed the insurance giant American International Group to the brink of collapse in September 2008. Another red flag is that banks often use special-purpose vehicles located abroad, frequently in the Cayman Islands, to structure these trades.

What a great idea! Just package up a bunch of risky assets, wrap them around a credit default swap, and voila! AAA rated, baby. What could go wrong?