VAN SUSTEREN: Have you determined why the whole YouTube video thing was brought up in Benghazi in the first place, whose idea it was, and why they seized upon it and held onto it for so long?

BOEHNER: Don’t know yet, but we’re going to find out.

VAN SUSTEREN: You have no sort of conceivable theory about, like, you know—

After more than eight months of investigation, neither Van Sustern nor Boehner has even a clue about where the “YouTube video thing” came from! So let’s make this as easy as possible for them. Here’s what the CIA talking points said in the very first draft. This is before anyone else had seen them, commented on them, or asked for changes to be made:

We believe based on currently available information that the attacks in Benghazi were spontaneously inspired by the protests at the U.S. Embassy in Cairo and evolved into a direct assault against the U.S. Consulate and subsequently its annex.

This is also what the final draft of the talking points said. And here is Susan Rice on Meet the Press a few days after the attacks:

Putting together the best information that we have available to us today, our current assessment is that what happened in Benghazi was in fact initially a spontaneous reaction to what had just transpired hours before in Cairo, almost a copycat of the demonstrations against our 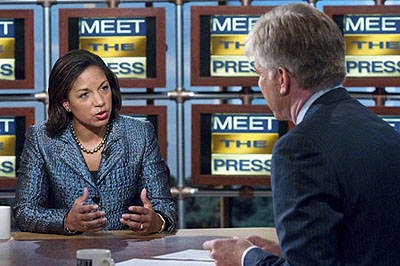 facility in Cairo, which were prompted, of course, by the video.

Rice said basically the same thing on the other Sunday shows too. And here is David Kirkpatrick of the New York Times reporting directly from the scene a month after the attacks:

To Libyans who witnessed the assault and know the attackers, there is little doubt what occurred: a well-known group of local Islamist militants struck the United States Mission without any warning or protest, and they did it in retaliation for the video….The fighters said at the time that they were moved to act because of the video, which had first gained attention across the region after a protest in Egypt that day.

Bottom line: The CIA said Benghazi was inspired by the Cairo protests. That’s precisely what Rice said on the Sunday shows, noting correctly that the Cairo protests were prompted by the video. What’s more, the Benghazi fighters themselves claimed that they were motivated by anger over the video. That’s where the “YouTube video thing” came from. There’s no mystery here.

Now, was the CIA correct? Were those on-the-ground reports correct? To this day, we don’t know for sure. But it doesn’t matter. At the time, that was the intelligence community’s best assessment. And that’s why Susan Rice said what she said. So once and for all, can we please stop pretending we have no idea where she came up with this stuff?