Oh yeah, this is going to be fun:

The State Department spokeswoman who earlier this month found herself in the middle of the controversy surrounding key revisions to the Benghazi talking points appears to be in line for a promotion. The White House announced Thursday that President Barack Obama intends to nominate Victoria Nuland as assistant secretary for European 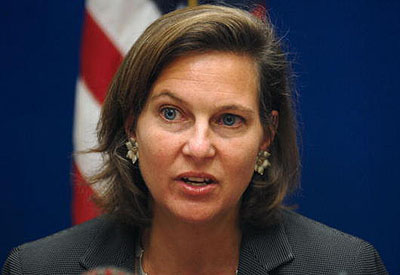 and Eurasian affairs, a position that requires Senate confirmation.

On a substantive basis, I know nothing about Nuland and have no opinion about whether she’s well qualified for this position. On a political basis, hoo boy. Obama is waving a red cape in front of a bull here. The only question is, on a scale of 1 to 10, just how loathsome and shameless can the attacks from the Fox News set get over this? I’m going to predict it’ll be about an 8. Give Ted Cruz a few minutes to warm up and he’ll be claiming that Nuland’s suggested changes to the Benghazi talking points should be prosecuted as a war crime.

What’s more, this comes on the heels of rumors that Obama plans to appoint Susan Rice as his National Security Advisor. Rice, of course, has already been attacked by Republicans about as viciously and shamelessly as any State Department lieutenant in recent memory. But it’s worth keeping in mind that there is a difference between the two women. In the Benghazi affair, Rice did nothing wrong, but she also did nothing especially noteworthy. Nuland, as near as I can tell, actually did yeoman work. The first draft of the CIA talking points was sloppily drafted and full of information that needed to be kept classified. Nuland firmly pushed back on this stuff, and eventually got it removed—which is exactly what she should have done. No good deed goes unpunished, of course, as I think we’re all about to find out.

On a gossipy note, this sure seems to suggest that Obama is tired of kowtowing to the know nothings in the GOP. And good for him. This is obviously a political risk, but apparently he doesn’t care anymore. He thinks Nuland is the best person for the job, so he’s nominating her. If the whackjobs start frothing at the mouth over it, let ’em froth.