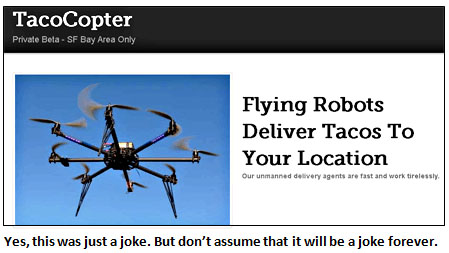 As we contemplate a future in which the sky is black with tacocopters, state legislatures and civil libertarians are starting to weigh in. Tim Lee reports:

The Texas legislation illustrates the complexity of regulating private drone use. The legislation that Perry signed on Friday features a broad prohibition on public and private drone use followed by a long list of exceptions. For example, Texas allows drones to be used by “a Texas licensed real estate broker in connection with the marketing, sale, or financing of real property.” Oil and gas companies can use drones for “inspecting, maintaining, or repairing pipelines.” Utility companies can use drones for “assessing vegetation growth for the purpose of maintaining clearances on utility easements.” The legislation enumerates at least 19 circumstances where drone use is allowed.

This approach assumes the Texas legislature can anticipate all of the beneficial uses for drones. That’s probably not a good assumption — people often discover unanticipated applications for new technologies, and it will be cumbersome to amend the law every time someone thinks of a new drone application.

Margot Kaminski, a scholar at Yale Law School, describes the Texas approach to regulating privately operated drones as “kind of a disaster.” She warns that regulations of private drone use could raise First Amendment problems.

For example, “if you have a news organization hovering over a protest and videoing cops beating protesters, that’s really valuable for the First Amendment,” she says. The courts have already said that private citizens have a First Amendment right to video-record the activities of public officials. The same reasoning suggests that aerial recording of police conduct would be constitutionally protected.

I’m going to tentatively—very tentatively—speak up in favor of the Texas approach. First off, I don’t think it assumes that they can anticipate every possible beneficial use of drones. Rather, it sets up a regime which assumes drones are bad unless proven otherwise. If you can sucessfully prove otherwise, then a new exemption will be written into the law.

Now, there are obviously problems with this. For starters, it’s a certainty that exemptions will be granted mostly to deep-pocketed special interests, not to the most worthy causes. It’s also, obviously, a pretty cumbersome approach. The Texas legislature may very well get tired someday of considering yet another plea from a drone-happy special interest. On the other hand, this might still be the best approach in the early going. Broader rules would almost certainly be better and fairer, but if Texas wants to keep a tight rein on drones until we have a better idea of what kind of rules we really want, that doesn’t strike me as an unreasonable approach. It will be easier to lighten the regs later than it will be to tighten them if drone use gets out of control (as Texas’s already long list of exemptions demonstrates).

As for Kaminski’s concerns, I just don’t get them at all. The First Amendment clearly allows broad regulations that aren’t aimed specifically at restricting speech. If you want to fly a helicopter, you have to have a license and you have to obey the rules, even if you’re a reporter covering a news event. Likewise, news organizations have to pay taxes and obey OSHA rules just like anyone else. They don’t get a pass just because they’re members of the press. A ban on drones that’s genuinely based on broad safety and privacy concerns would almost certainly hold up in court.

At the risk of being called a Luddite, I’d say the thing to think about here is not what’s possible today, but what’s going to be possible in ten years. Drones are only going to get better and cheaper over time, and we need to think about what kind of regs we want in place when (a) anyone can buy a personal fleet of drones for the price of a washing machine; (b) small drones can fly for hours without recharging; (c) their surveillance capabilities are high quality; and (d) they’re automated enough not to need much human control. Does it sound silly to think that a typical neighborhood could have hundreds or thousands of drones flying around? I don’t think so. In fact, given my dyspeptic view of my fellow human beings, I’d say it sounds likely. Keeping a lid on this stuff until we’re a lot more sure of the consequences doesn’t really sound like such a bad idea to me.