Why does Goldman Sachs own a big aluminum warehousing business that it deliberately runs poorly? Yesterday I suggested that Goldman couldn’t possibly have any interest in the warehousing business per se, so instead their interest must have something to do with trading profits to be made by controlling and manipulating physical stocks of aluminum.

Today, Izabella Kaminska of Alphaville confirms that this is the case. But how and where does Goldman make money? I can’t pretend to follow every twist and turn of Kaminska’s explanation, but here’s my take on the basics.

Suppose that aluminum sells for $1,800 per ton on the spot market, but a contract for December delivery sells for $2,000. There’s a moneymaking opportunity here: buy the aluminum now, warehouse it, and simultaneously forward sell it at a premium. As long as 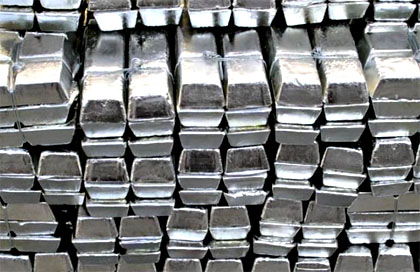 your storage and financing costs are low, you’re guaranteed to make money.

This condition is commonly called contango, and it’s not unusual in commodities markets. Goldman was able to profit from this—their financing costs were already low, and buying the warehouse business provided them with low storage costs—but that’s not the whole story. It turns out that lots of Goldman customers wanted to get in on this action too, but they were limited by the fact that contango plays were a big drain on their balance sheets. To help out, Goldman “created a business in freeing up the balance sheets of those firms which were encumbered by large but clearly profitable contango trades, by financing these trades and taking them off-balance sheet in return for some of the contango margin.” In other words, Goldman helped its customers expand their trading positions in return for a cut of the profits. Owning the warehouses was key to this.

There are six paragraphs of detailed explanation that follow this, and I might as well just fess up that I don’t understand them. Click the link if you’re more finance savvy than me and want to know more. The end result, says Kaminska, was “the mass encumbrance of physical commodities for the purpose of collateralising implied future demand from retail and pension funds — which would otherwise take the shape of a much less tangible and uncollateralised futures investment.”

Roger that. In any case, Kaminska suggests that this would basically be OK except that:

Point 3 has to do with the practice of reclassifying inventory as either public or private. By manipulating apparent inventory levels, Goldman and its customers can benefit when markets are in contango and when they’re in the opposite, or backwardation, state:

This is the other reason why owning warehouses became so appealing. It’s much harder to keep inventory out of sight of public eyes if you’re dependent on the LME warrant system or third-party providers.

Bottom line: you just knew that this whole thing had to be some insanely complicated trading ploy, and you were right. It’s complicated enough that I still don’t really understand the details. In a nutshell, though, if you control the inventory of a commodity, you can make a lot of money. Speculators have known that for a very long time, but the old, crude days of simply cornering a market are gone. These days, markets are manipulated in much more sophisticated ways. As always, though, you and I are the ones who pay the price.