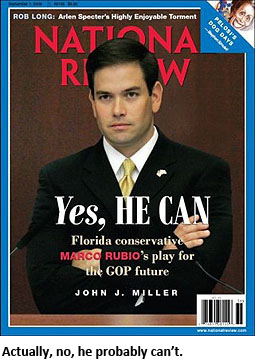 Josh Marshall and Ed Kilgore are arguing about whether Marco Rubio is toast. Can I play?

Here’s my guess: he’s toast for 2016, but might make a comeback later. He’s pretty young, after all. The specific question that Josh and Ed are tossing around, though, is this: how can we say that Rubio is doomed just because he’s pissed off the base over immigration reform? After all, the last two Republican nominees had big base problems too.

I think the answer here is fairly simple, and it’s something that gets lost a lot: the tea party makes up only about half—or maybe slightly less than half—of the Republican base. In the past two GOP primaries, what’s basically happened is that there was a huge clown show between a bunch of candidates all sprinting rightward in order to win the tea party vote, and only one or two candidates seriously going after the more moderate vote. John McCain and Mitt Romney were by far the strongest candidates among moderates, and that’s how they won. They got the bulk of the non-tea party vote all to themselves, added in a bit of tea party support here and there, and that was enough. All the other candidates were tearing each other apart for the tea party vote, and in the end that meant none of them could build a commanding lead.

Rubio’s problem is that, immigration aside, he’s very clearly a creature of the tea party. If he runs, he’s going to be one of the guys competing like a pit bull for the 40 percent of the base they represent. But with immigration working against him, he has no chance of coming out on top. In a nutshell, he’s dead to the tea partiers and he’s too rabidly right-wing to make a play for the center. For now, he’s got nothing.

That could all change in the future, and frankly I think he’d be smart to regroup and think about 2020 or 2024. But this is why Rubio is toast for now. Immigration was his ticket to a share of the moderate vote, and that’s now looking like a bad bet.