Tyler Cowen recommends “Carbon Taxes vs. Cap and Trade: A Critical Review,” by Lawrence Goulder and Andrew Schein of Stanford University. This is right up there with “lead abatement” on the yawn scale, but wait! There will be no long, wonky excerpts. Instead, let’s get straight to the meat. Here’s their list of pros and cons: 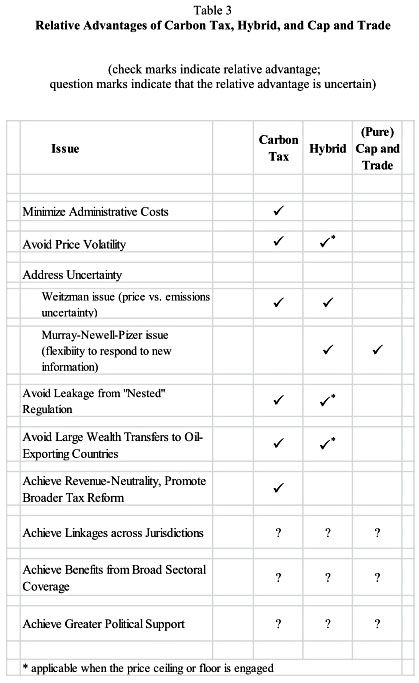 It sure looks like a carbon tax is the winner, doesn’t it? But that’s because Goulder and Schein are economists, and economists almost universally prefer a tax to an emissions trading scheme. One way to come to that conclusion is to ignore the single biggest factor in favor of cap-and-trade: namely that it actually caps emissions with certainty. Goulder and Schein don’t ignore this, but they do manage to turn it on its head. In the table above, it’s cleverly hidden in the box called “Weitzman issue (price vs. emissions uncertainty),” which makes it into an economically tractable issue and, in an amazing feat of magic, converts it from an advantage of cap-and-trade to an advantage of a carbon tax. How? By assuming that the danger of allowing emissions to get too high is less than the danger of allowing the carbon price to get too high. So that’s that. As long as you assume the damage from greenhouse gas emissions isn’t that big a deal—not as big a deal as high energy prices, anyway—then cap-and-trade looks like a lousy deal.

Why am I being so snarky here? I don’t know. I’m in a bad mood, I guess. It’s unfair. There really are good reasons to prefer a carbon tax, even if I think that Goulder and Schein have their thumbs on the scale by assuming low administrative costs and better Weitzman efficiencies. What’s more, the truth is that I don’t care anymore. I have a modest preference for cap-and-trade precisely because it caps emissions, which is my highest priority. It also provides trading flexibility, which Goulder and Schein acknowledge. But honestly, the differences are small. If we could actually get stronger political support for a carbon tax, that would be fine with me. Any kind of carbon pricing is fine with me at this point.

But that’s not very likely. If Republicans are unalterably opposed to cap-and-trade because it’s really cap-and-tax, what are the odds that they’d support something that just admits it’s a tax up front? Not very good. Even as part of a tax reform package that lowers marginal income tax rates, something that you’d think nobody in either party would oppose, it seems pretty unlikely.

But if this is ever on the table, I’m all for it. It’s the most no-brainer form of tax reform I can think of. And even allowing for their thumbs on the scale, Goulder and Schein make a good case for a carbon tax. Too bad about all those Republicans, eh?