The New York Times reports that household income is still in the doldrums:

Median household income has begun to recover over the last two years, but households still have not come close to regaining the purchasing power they had before the financial crisis began, a new study says. The study, issued on Wednesday by two former Census Bureau officials, suggests why many people remain glum even though the economy is growing and unemployment has declined.

In fact, it’s worse than that. The study in question comes from Sentier Research, which calculates a Household Income Index going back to January 2000. As you can see below, incomes were pretty stagnant during the entire aughts, which means that median household income today isn’t just below the level of 2007, it’s below the level of 2000. If you add in health benefits, the picture is brighter, but only modestly: Total household compensation today is still below its level in 2000 even when you count healthcare premiums. We are now well into our second decade of flat incomes for the non-rich. 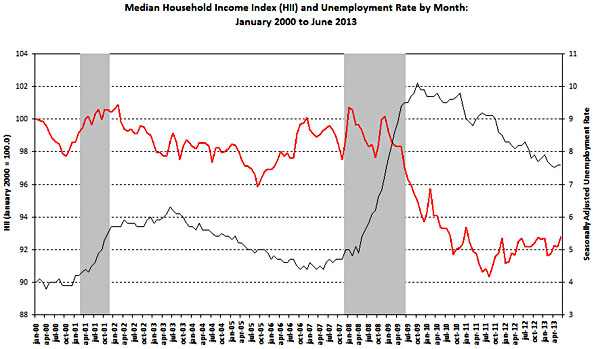