The LA Times reports on this week’s huge drone convention in Washington DC. The vendors all want to sell more drones, of course:

The first goal, however, is to ease public fear of drones. Most in the fast-expanding industry won’t even use the word, preferring euphemisms like “unmanned aerial vehicle” and remotely piloted aircraft, rather than the term most people associate with 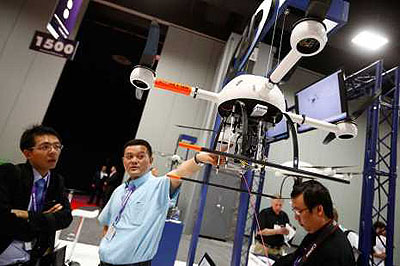 lethal drone strikes by the Obama administration against suspected terrorists from Pakistan to North Africa.

Good luck with that! Especially with exhibits like this:

In the giant hall below, passersby had their body heat invisibly scanned by infrared sensors, were invited to operate simulators to send drones screaming over the Hindu Kush, and watched toy-sized helicopters flutter and take pictures in front of home-sized windows. Barkers from Ohio, Florida, North Dakota and other states pitched drone testing sites. Colorful banners from aerospace giants like Boeing and Northrop Grumman hung from the ceiling next to drab, gray models of unmanned aircraft.

Yep, that sure makes me more likely to soften my opinion of domestic drone operation.