Accounting Today reports today on the latest in the IRS scandal. Yes, Accounting Today. Apparently no one else was interested, which I suppose might actually be a good sign.

Anyway, it seems that the tireless Sander Levin has unearthed yet another IRS PowerPoint presentation from around 2010 that tells screeners to watch out for groups asking for tax-exempt status who might actually be primarily engaged in political activities. Here are the relevant slides: 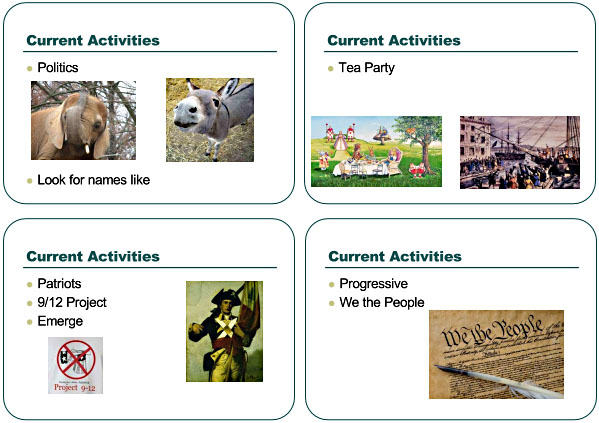 Aside from providing yet more evidence in favor of a federal ban on PowerPoint presentations, the astute observer will note that the first slide features both an elephant and a donkey. (Sorry, Green Party.) The next slide does indeed list Tea Party, and then Patriots and 9/12 Project. But guess what? Next up are Emerge, Progressive, and We the People. This sure doesn’t look like an IRS jihad against conservative organizations, does it?

This comes via Steve Benen, who apparently reads Accounting Today as part of his morning routine. OK, probably not. But it wouldn’t surprise me. Here’s his final comment:

This would a time for at least some accountability. There were countless Republicans and mainstream pundits — left, right, and center, from Limbaugh to Jon Stewart — who were absolutely convinced that this story was legitimate and President Obama bore responsibility for the wrongdoing we now know didn’t exist.

And yet, the scandal that evaporated into nothing has led to precious little introspection among those who demanded the public take it seriously. The political world flubbed this one, and instead of acknowledging that, it’s simply moved on as if it hadn’t made a mistake.

Look! Up in the sky! It’s Benghazi!