Billionaire Michael Bloomberg has been mayor of New York City for 12 years. As a Democrat-turned-Republican-turned-independent, he’s long gotten a lot of love from centrist pundits who believe that Americans are tired of partisan wrangling and are eager to unite behind a guy whose sole dedication is to Getting Things Done™. Yesterday, however, 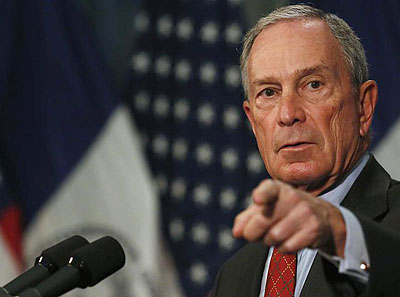 his hand-picked successor suffered a big primary loss and his hand-picked issue of gun control led to a recall of two legislators in Colorado. Dave Weigel pronounces this the death of Bloombergism:

The New York election was a repudiation of Mayor Bloomberg. The Colorado election is worse—a defeat for Bloomberg the Icon. For half a decade or more, a certain sort of liberal, usually well-off, has convinced himself that the country he dreams of is possible, if only Bloomberg wills it. Bloomberg seemed to believe this too; his guru Kevin Sheekey interpreted polls about how many voters said the country was “off track” and demanded a third-party candidate to right it. After a bad Acela ride in 2012, Thomas Friedman asked Bloomberg to run for president and “challenge, and maybe even improve, both major-party presidential candidates by speaking honestly about what is needed to restore the foundations of America’s global leadership before we implode.”

The people who believed that on Monday probably still believe it. A couple of election losses aside, in a few months Bloomberg will be a private citizen with billions to spend on his political causes. That’s enough time to rethink this theory that you can ignore all critics, drop money from a helicopter, and expect to be forever proven right.

I wish I were so optimistic, but in the minds of the self-professed post-partisan Beltway chatterers, I suspect that Bloombergism can never fail, it can only be failed. They seem to be endlessly unable to figure out that when people say they’re tired of partisan wrangling, what they mean is that they want the other guys to stop being so damn unreasonable. When you dig an inch below the surface, it’s actually a desire for more partisanship, not less.

My great grandfather started life running a small-town Republican newspaper. Then he switched to being a Democrat, and then finally to being an independent so he could harass both parties equally. But he still died broke. Maybe someday Americans will decide to do without their parties, but that day is not today.