Michael O’Hare points us this morning to a study of cell phone usage in cars that confirms the obvious: it’s dangerous. More dangerous than driving drunk, in fact. What’s more, as the chart on the right shows, hands-free talking doesn’t help. In fact, for certain 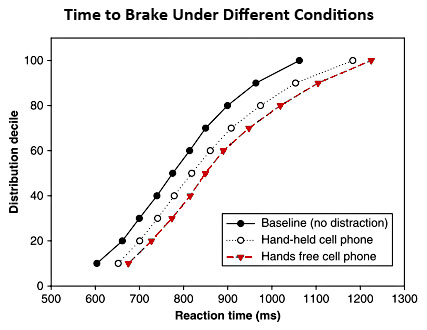 To understand the reason, consider driving while (i) listening to the radio as I was (ii) conversing with an adult passenger (iii) transporting a four-year-old (iv) sharing the front seat with a largish dog.

Why are the first two not dangerous, and the last two make you tense up just thinking about them? The radio is not a person, and you subconsciously know that you may miss something if you attend to something in the road ahead, but also that you won’t insult it if you “listen away”, and it won’t suffer, much less indicate unease. The adult passenger can see out the windshield and also catch very subtle changes in your tone of voice or body language. If you stop talking to attend to the car braking up ahead, the passenger knows why instantly, and accommodates, and because you know this, you aren’t anxious about interrupting the conversation. The dog and the child, in contrast, are completely unaware of what’s coming up on the road or what you need to pay attention to; the former is happy to jump in your lap if it seems like a good idea at any moment, and the child demands attention on her own schedule and at her will.

The other side of a cell phone conversation, unlike the passenger, cannot see out the windshield nor see you, and gets none of the subtle cues about why you stopped talking in the middle of a sentence (indeed may not even know you are in a car). You know this, and you know subconsciously that diverting your attention to the road will make your interlocutor anxious, perhaps saying “are you still there? hello?” … and you’re at the side of the road exchanging papers and feeling like an idiot.

The full study is here. In general, the authors conclude that hands-free talking isn’t worse than talking on a handset, but neither is it any better: “Taken together, the data demonstrate that conversing on a cell phone impaired driving performance and that the distracting effects of cell-phone conversations were equivalent for hand-held and hands-free devices. Compared to single-task conditions, cell-phone drivers’ brake reaction times were slower and they took longer to recover the speed that was lost following braking.”

The problem with cell phones has never been primarily about taking your eyes off the road to dial, or about the dexterity required to hold a handset to your ear. It’s all about cognitive distraction, and the study’s authors report that drivers who do a lot of talking on cell phones don’t get any better at it: “Real-world experience using a cell phone while driving did not make the so-called experts any better at multitasking than the novices….Neither real-world practice nor simulator training made drivers perform better in novel dual-task conditions. There was no evidence that drivers became experts at the dual-task combination of talking on a cell phone while driving.”

Bottom line: When you’re in the car, turn on the radio. Listen to a ballgame. Plug in your favorite play list. But don’t get drunk and don’t talk on your cell phone. You’re not superman,1 and you don’t have special multitasking powers that make either one safe. They’re both really dangerous no matter how you do them.

1Actually, the news on this front is really bad. It turns out that about 2 percent of you do have multitasking superpowers. You are almost certainly not one of them, but the mere fact that a tiny number of these folks exist is probably enough for everyone on the planet to convince themselves that they’re one of them.

But you’re not. Seriously. You’re not.