The New York Times reports today on the case of David House, who raised funds for the legal defense of then-Pfc. Bradley Manning and thereby caught the attention of Homeland Security. There was no evidence that House had done anything wrong and therefore no chance of getting a warrant to search his house or his computers, but that was a mere roadblock for the authorities who were interested in him. They just waited until House took a vacation to Mexico. Upon his return, they detained him and seized his phone, camera, and laptop. No warrant needed:

Although government investigators had questioned Mr. House about his association with Private Manning in the months before his trip to Mexico, he said no one asked to search his computer or mentioned seeking a warrant to do so. After seizing his devices, immigration authorities sent a copy of Mr. House’s data to the Army Criminal Investigation Command, which conducted the detailed search of his files. No evidence of any crime was found, the documents say.

….While many travelers have no idea why they are singled out for a more intrusive screening at a border, one of the documents released in Mr. House’s settlement shows that he was flagged for a device search months before he traveled to Mexico.

….“It is clear from these documents that the search of David House’s computers had nothing to do with protecting the border or with enforcing immigration laws,” said Catherine Crump, a lawyer with the American Civil Liberties Union, which represented Mr. House along with the A.C.L.U. of Massachusetts. “The government used its broader powers at the border to conduct a search of House’s devices that no court would have approved.”

This is all pretty outrageous, and House sued the government with the help of the ACLU. This means that we get a look at some of the documents in the case, which you can read here. It turns out that although the most striking feature of the case is the almost unbounded power of the immigration service to detain and harass innocent travelers, the most striking feature of the documents is their demonstration of the immigration service’s almost unbounded technical incompetence when it comes to forensic analysis of computer equipment. I’ve pasted their narrative below, along with some annotations. Read it and weep. 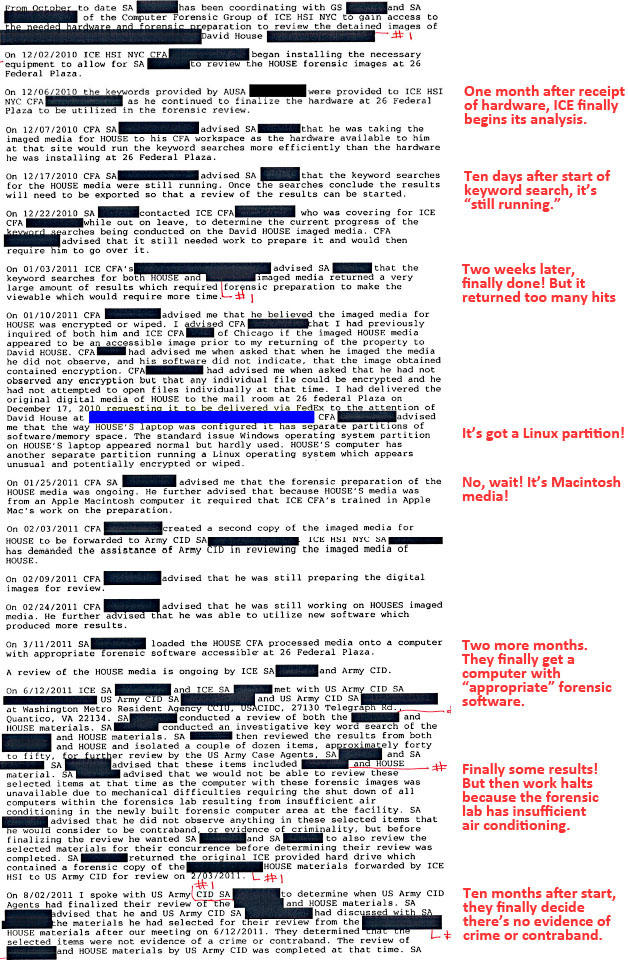