Paul Krugman is attending the annual IMF research conference and reports that the presentations have covered a wide range of topics:

It’s pretty clear, however, that the blockbuster paper of the conference will be one that focuses on the truly ugly: the evidence that by tolerating high unemployment we have inflicted huge damage on our long-run prospects.

How so? According to the paper (with the unassuming title “Aggregate Supply in the United States: Recent Developments and Implications for the Conduct of Monetary Policy”), our seemingly endless slump has done long-term damage through multiple channels. The long-term unemployed eventually come to be seen as unemployable; business investment lags thanks to weak sales; new businesses don’t get started; and existing businesses skimp on research and development.

….The evidence is overwhelming that by failing to respond effectively to mass unemployment — by not even making unemployment a major policy priority — we’ve done ourselves immense long-term damage. And it is, as I said, a bitter irony, because one main reason we’ve done so little about unemployment is the preaching of deficit scolds, who have wrapped themselves in the mantle of long-run responsibility — which they have managed to get identified in the public mind almost entirely with holding down government debt.

The authors of the study conclude not merely that GDP growth slowed down during the recession and its aftermath—that’s pretty obvious—but that potential GDP has also taken a hit from our continued economic weakness. In other words, even running at full tilt our economy’s productive capacity is now about 7 percent below its pre-crisis trend level—which represents a loss of about $3,000 for every man, woman, and child in the country. This is the price we’re paying for four years of austerity mania. 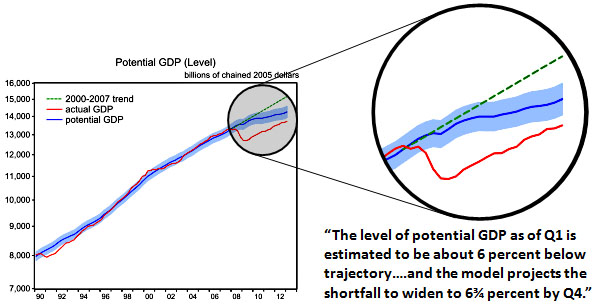