Lara Logan appeared on This Morning a few hours ago to admit that she had been misled by Dylan Davies, a security manager who told her a dramatic story two weeks ago about his actions on the night of the Benghazi attacks last year. Logan made Davies the centerpiece of a 60 Minutes segment about Benghazi, and shortly after it aired we learned that an after-action “incident report” contradicted Davies’ on-air account. Today, 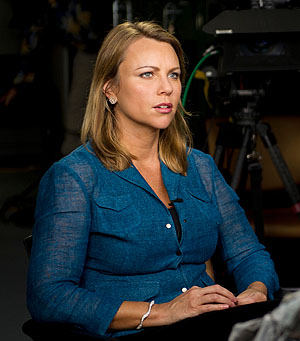 Norah O’Donnell asked the question that’s been on my mind ever since:

O’DONNELL: Last Thursday, The Washington Post ran a report that questioned the central parts of what Davies had told you. They cited this incident report right after the attack that he gave to Blue Mountain, the security firm that he worked for. He told them that he never made it to the compound, that he was at his villa there. Did you know about that report, that incident report?

LOGAN: No, we did not know about that incident report before we did our story. When The Washington Post story came out, he denied it. He said that he never wrote it, had nothing to do with it. And that he told the FBI the same story as he told us. But as we now know, that is not the case.

So here’s what we know. Davies never told Logan about the incident report. He never told the co-author of his memoir about the incident report. When the content of the report was revealed, he invented an entirely implausible story about lying to his supervisor in the report because he respected him so highly and didn’t want him to know that he’d disobeyed orders not to approach the compound. And yet, in a story that should have set off all sorts of alarms in the first place, this still didn’t set off any alarms for Logan. She continued to defend Davies and her reporting until news emerged yesterday that the incident report matched what Davies had told the FBI in a debriefing shortly after the attack.

In her report, Logan also failed to mention that Davies’ book about Benghazi is being published by a sister corporation of CBS, one that specializes in right-wing nonfiction. “We killed ourselves not to allow politics into this report,” Logan told the New York Times, but somehow that little tidbit about Davies’ publisher was inadvertently left out of her 60 Minutes segment.

I don’t know what’s going on here, but it was clear from the moment the segment aired that Logan was heavily invested in a Benghazi narrative of some kind. I’m not even sure what it is, but Davies was an iffy source from the start, and the other two folks she interviewed were well-known Benghazi critics who had told their stories many times before. They had nothing new or very interesting to say, and there were lots of reasons to be skeptical about their accounts. But Logan never mentioned any of that. She just offered them up as unimpeachable sources.

Something isn’t right here. This wasn’t a deeply reported segment that took a year to prepare. Nor was it the product of a neutral reporter. CBS needs to investigate what happened, and they need to do it with the same thoroughness that they investigated Dan Rather and Mary Mapes five years ago when they got snookered on the George Bush National Guard story that they obviously wanted to believe just a little bit too badly. Something like that seems to have happened here too.