On Friday I excerpted an interview with M. Night Shyamalan in which he said that America practices “education apartheid.” If you look at just white kids, he said, “We beat everyone. Our white kids are getting taught the best public-school education on the planet. Those are the facts.”

Bob Somerby calls this “absurdly inaccurate,” and he has a point. Shyamalan is exaggerating, and I sloppily let it pass because I wanted to address what I thought was his primary point. So allow me to revise and expand a bit. Not as an excuse for a hurried post, but just to explain how I view this stuff.

For starters, when I look at international test scores, the first thing I usually do is toss out the scores from most Asian countries. Don’t worry: I don’t expect anyone else to do this, and I’m not claiming that any fair assessment should throw them out. But frankly, I just don’t care how well South Korea does, because I know how they do it. They do it by making their kids’ lives a living hell, schooling them for a dozen hours a day or more and then ruining 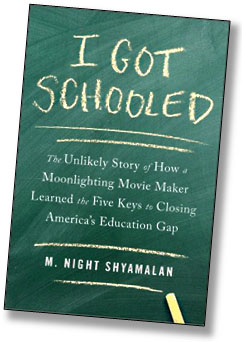 their lives based on a single day or two of testing when they’re 17. As a result, they get high test scores. But who cares? I think we all know that you can get high test scores by cramming your brains out like that. It tells us nothing, and I very much doubt that it actually produces better-educated adults in the long run. It merely produces kids who can produce eye-popping standardized test scores at age 17.

So I toss out the fabled Asian miracle countries. Then I look at the rest. Do American kids outscore everyone else? Nope. Somerby is right about that. But that’s missing the forest for the trees. Let’s all agree that Shyamalan is both cherry picking a bit and inflating his claims. Two Pinocchios for Shyamalan! Instead, let’s just make the more accurate claim: If you compare America’s white kids to those of most other countries—aggregating all the evidence, not just one or two data points—they do pretty well. Not spectacularly well, but pretty well. I think a fair observer would conclude that these kids were getting a pretty good education. Probably as good or better than most other countries in the world.

And that claim, even though it’s more modest, is important. It means that American education isn’t, either philosophically or foundationally, a disaster area. Nor is it in decline. For most American children, it works fine and it doesn’t need radical changes. Rather, there’s a small subset of American children who have been badly treated for centuries and continues to suffer from this. We do a lousy job of educating them, but it’s not because we don’t know how to educate. We’ve just never been willing to expend the (very substantial) effort it would take to help them catch up.

Anyone who disagrees with this conclusion is welcome to argue about it. But I think it’s one of the paramount facts about education in America. If you ignore it, your diagnosis of our educational problems is almost certain to be badly wrong. In the end, the fact that Shyamalan recognizes this so forthrightly strikes me as more important than the fact that he gets a little too far over his skis when he talks about it.

As for Shyamalan’s proposed five-point plan to fix things, I’ll repeat that I don’t think they’re silver bullets or that they’re unassailable. But as a group, they struck me as pretty reasonable compared to most of the educational reforms that dominate our conversation. For that reason, I welcome his debut into the ed wars.