National Review is being sued by climate scientist Michael Mann for defamation. In a blog post at The Corner last year, Mark Steyn quoted Rand Simberg calling Mann the “Jerry Sandusky of climate science” (both are from Penn State); wrote 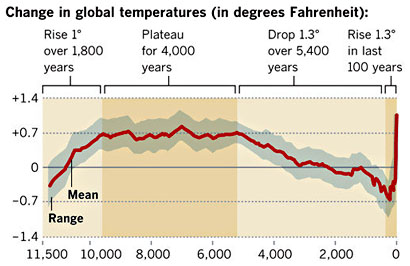 that Mann was “the man behind the fraudulent climate-change ‘hockey-stick’ graph”; and concluded that “his ‘investigation’ by a deeply corrupt administration was a joke.” (The “investigation” cleared Mann of any wrongdoing.)

A judge recently ruled that Mann’s suit could go forward. I’m personally a little uneasy about this, since I’d normally think of Steyn’s post as hyperbolic and stupid, but still fair comment on a public figure. It’s a close call, though. I suspect Mann will lose his case, but that’s for a jury to decide now.

Today, though, I read this blog post over at NRO asking for money to help them with their defense:

One readers supports NRO with $50 and this note:

I have followed the catastrophic global warming argument since I retired in 2007. In a few years it will be seen as the greatest “scientific” scam of all time. Best wishes on your court case, and glad to help.

Have tried in past to support, fully agree with your efforts here. As a chemical engineer, I have been looking at “global warming” for over a decade. Such nonsense.

Questioning climate science is one thing, and National Review has done plenty of that. But I’m still a little surprised that apparently they aren’t embarrassed at having readers who believe that global warming is “the greatest scientific scam of all time.” Or, as the chemical engineer puts it, “nonsense.” In fact, NR is so far from being embarrassed that they put these letters front and center on their website as a call to arms.

Wasn’t there a time when a serious publication would quietly bury correspondence like this? Sure, every magazine has some lunatic readers, but you generally want your public face to be a little more serious. The stuff you publish should at least have the veneer of respectability.

Either that’s hopelessly old-fashioned thinking, or else National Review really does believe that climate change is just flatly a scientific scam. I guess I don’t read them closely enough to know which. But I was still a little taken aback that they seem actively proud to trumpet stuff like this. Shouldn’t they be leaving this kind of thing in Glenn Beck’s capable hands?