What exactly was David Wildstein’s job at the Port Authority of New York and New Jersey? His official title was Director of Interstate Capital Projects, which isn’t much help since building and managing interstate capital projects is pretty much all the Port Authority does. The position was invented in 2010 after Chris Christie became governor, and it was eliminated after Wildstein resigned following 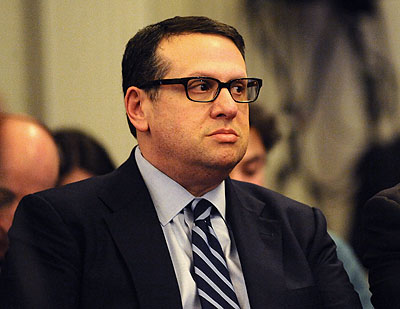 the Bridgegate revelations. It doesn’t appear to have much of an official job description. So what did Wildstein do? Here’s what Shawn Boburg of the Bergen County Record said about him in a 2012 profile:

[Wildstein] is playing a key behind-the-scenes role in Governor Christie’s effort to get more control over the Port Authority, the bi-state transportation agency that has come under increased scrutiny since raising bridge and tunnel tolls in September….Several executives said Wildstein has played a role in placing some of those recommended by the Christie administration in jobs and that he seems to serve as the administration’s eyes and ears within the byzantine agency.

….Eight current and past Port Authority colleagues agreed to speak about Wildstein, but insisted that their identities remain undisclosed because they feared retribution. They described Wildstein, one of 50 recommended for jobs by the Christie administration, as intimidating, hardworking, intelligent, private and fiercely loyal to the governor.

Some bristle that a senior executive post is occupied by someone with more experience with campaigns than with transportation issues. “He became the watcher of the entire agency,” one person said. “What he was watching for was strict adherence to the Christie agenda.”

This wasn’t a nothing job. This was a really important position where he was in charge of doling out billions of dollars for capital projects, much of that in New Jersey.

And what we know now is that David Wildstein was taking money and putting them into projects that solved other problems for Chris Christie, lots and lots of money….There was a project lifting up the Bayonne Bridge….There was also billions of dollars that went into the Pulaski skyway….Now, this seems like a mundane project, but the key thing about it is that it meant that Chris Christie didn’t have to spend New Jersey funds. So it solved a big budget headache.

….Now, as you mentioned, the top of the segment, I learned and some other reporters learned this week, that this position had been eliminated. Which sort of goes to, was it key? Was it important? Or was it something that was created so that David Wildstein could carry out Chris Christie’s will at this authority? Which is, let’s not forget, a bi-state authority, New York and New Jersey. It runs the airports. It runs the bridges and tunnels between New York and New Jersey. That’s its function.

The Christie take on this is that the Port Authority was a mess and badly needed better oversight, which Wildstein provided. Everyone else’s take is that Christie wanted more personal control over which projects were and weren’t approved, and Wildstein was his inside guy, the enforcer who made sure that Christie loyalists were installed in key positions and Christie priorities were taken care of.

And I guess that job is no longer necessary. That’s either because Wildstein did a bang-up job and the Port Authority no longer needs extra oversight, or because Bridgegate made it politically impossible to keep a Christie enforcer on the Port Authority payroll. I guess you can make up your own mind about which seems more likely.