Pew has released a new survey about the social and political attitudes of various generations, and it makes for interesting reading. The thing that strikes me the most is just how clear the trends are. Each successive generation is more politically independent; more religiously independent; less likely to be married in their 20s; less trusting of 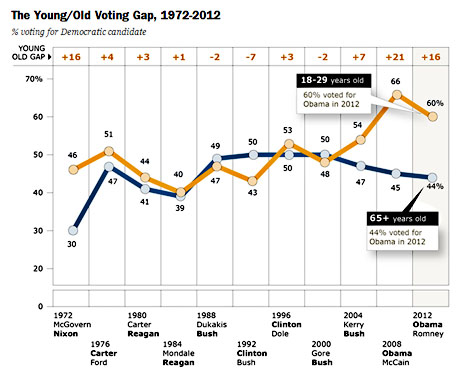 others; less likely to self-ID as patriotic; and less opposed to gay rights. There’s virtually no overlap at all. It’s just a smooth, straight progression.

But the single most interesting chart in the report is one that doesn’t show this smooth progression. You’ve probably seen this before from other sources, but the chart on the right basically shows that for the past 40 years voting patterns haven’t differed much by age. In fact, there’s virtually no difference between generations at all until you get to the George Bush era. At that point, young voters suddenly leave the Republican Party en masse. Millennials may be far less likely than older generations to say there’s a big difference between Republicans and Democrats, but their actual voting record belies that.

Whatever it was that Karl Rove and George Bush did—and there are plenty of possibilities, ranging from Iraq to gays to religion—they massively alienated an entire generation of voters. Sure, they managed to squeak out a couple of presidential victories, but they did it at the cost of losing millions of voters who will probably never fully return. This chart is their legacy in a nutshell.