This is a truly fascinating chart: countries with lots of income inequality—driven largely by the gains of the ultra-rich—also spend more and more of their money on security services. Gotta keep the hoi polloi at bay somehow, after all. However, the researchers who produced 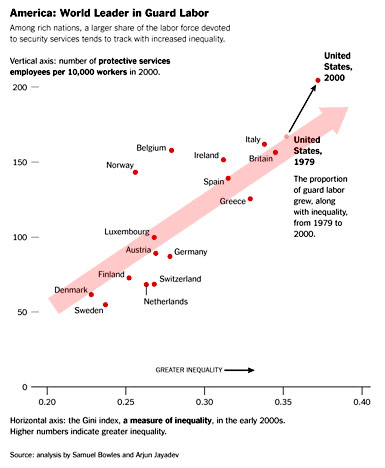 Does the graph show that inequality causes a country to devote more of its labor force to guard labor? It is hard to be sure. It could be that people with a strong commitment to economic justice are, for some unknown reason, also more law-abiding, explaining the difference between Denmark and the United States. But the correlation evident in the graph could be evidence that economic disparities push nations to devote more of their productive capacity to guarding people and property. Fear and distrust of one’s neighbors and fellow citizens fuel the demand for guard labor. Economic disparities can contribute to both. Among the countries shown, a common measure of distrust of strangers is strongly correlated with both the guard-labor fraction and inequality.

Social spending, also, is strongly and inversely correlated with guard labor across the nations shown in the graph. There is a simple economic lesson here: A nation whose policies result in substantial inequalities may end up spending more on guns and getting less butter as a result.

Perhaps this is our dystopian, Piketty-esque future: a small class of ultra-wealthy rentiers; a breakdown of public safety because the rich employ their own private security forces and don’t feel like funding anything further; a retainer class of managerial drones; and then everyone else—sullen and resentful, but kept in line by the hard men in dark glasses toting automatic weapons and driving armored limos.

Actually, probably not. Eventually robots will provide better security services than fragile human beings, so the security forces will be out of jobs too. By then, however, even the ultra-wealthy won’t care if robots produce enough to make life lovely for everyone. Sure, they’ll still want their share of the still-scarce status goods—coastal property, penthouse apartments, original Rembrandts—but beyond that why should they care if everyone lives like kings? They won’t, and we probably will. As long as we don’t all kill ourselves first.