On Thursday Pew released its latest “typology report,” which breaks down Americans into seven different groups. I’m a little skeptical of these kinds of clustering exercises, but I suppose they have their place. And one result in particular has gotten a lot of 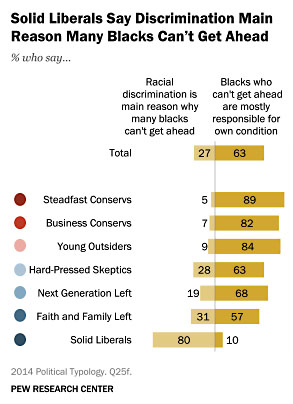 play: the finding that more than 80 percent of conservatives believe that blacks who can’t get ahead are responsible for their own condition.

But I think that misstates the real finding of Pew’s survey: everyone thinks blacks who can’t get ahead are mostly responsible for their own condition. With the single exception of solid liberals, majorities in every other group believe this by a 2:1 margin or more. That’s the takeaway here.

The other takeaway is that the news was a little different on the other questions Pew asked about race. The country is split about evenly on whether further racial progress is necessary, and large majorities in nearly every group continue to support affirmative action on college campuses. A sizeable majority of Americans may not believe that discrimination is the main reason blacks can’t get ahead, but apparently they still believe it’s enough of a problem to justify continuing efforts to help out.

Overall, though, this is not good news. It’s obvious that most Americans don’t really think discrimination is a continuing problem, and even their support for affirmative action is only on college campuses, where it doesn’t really affect them. If that question were about affirmative action in their own workplaces, I suspect support would plummet.

I don’t have any keen insights to offer about this. But like it or not, it’s the base on which we all have to work. Further racial progress is going to be very slow and very hard unless and until these attitudes soften up.