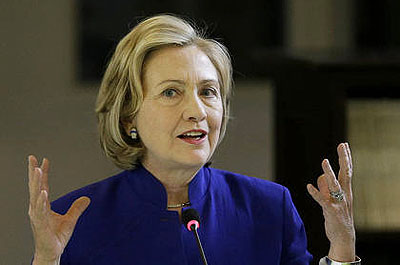 Dave Weigel notes that the media is still obsessed with Hillary Clinton’s comment about being “dead broke” when she and Bill left the White House:

They’ve got to be sick of this by now. Maggie Haberman had it nailed three weeks ago: Hillary Clinton was “still raw over the partisan wars that hindered her husband’s legacy and left the couple with millions of dollars in legal debt.” Her answer, as she told Ramos, was accurate, and it’s baffling to her that this became a “gaffe.” As she continued her tour, HarperCollins was printing up copies of Clinton, Inc., a tell-all by the Weekly Standard’s Daniel Halper. On Page 18, Halper recalls that in 2001 “the Clintons were broke, owing a fortune in legal fees from the many investigations into their personal lives,” and that they had to be loaned $1.3 by Terry McAuliffe. Until just a month ago, that was how even conservatives remembered the Clintons’ departure from the White House.

What’s the deal with this? Sure, Hillary could have responded to questions about her wealth a little better. She’s not the natural politician Bill is. But really, there’s not much else here. So why does it continue to be news a full month later? Uber-insider Mark Halperin explains:

She has a lot of positive attributes that are currently just being overwhelmed by all this negative coverage. And it’s going to keep going. The momentum—there’s, there’s— The press loves to cover her hard.

This comes courtesy of Bob Somerby, who’s been following this ever since the initial flood-the-zone coverage of Hillary’s “gaffe” in the Washington Post. Somerby tells the rest of the story:

Multimillionaire TV stars asked if voters would support a person as wealthy as Clinton. In response to Clinton’s answers, some of the nation’s most famous pundits launched their famous “gaffe culture.”

The Washington Post even launched a front-page jihad concerning the size of Clinton’s speaking fees. In the New York Times, Maureen Dowd assailed Clinton for her “rapacious” behavior and her “wanton acquisitiveness,” which she was said to be passing along to her daughter.

….Halperin made a starting suggestion—he suggested the press corps’ coverage of a major candidate could determine the outcome of our next White House campaign.

Plainly, that’s what happened in Campaign 2000, when a twenty-month war against Candidate Gore let George Bush reach the White House. In the main, that war was conducted by the mainstream press corps, not by the RNC.

The press corps’ poisonous war against Gore let Bush reach the White House. But it’s a basic law of the guild: Major journalists never suggest that the behavior of their own guild could have such startling effects.

The media’s preoccupation with the Clintons’ wealth won’t last forever. Even for the Washington press corps, it’s too transparently silly to pretend that it’s somehow surprising that a presidential candidate is wealthy. But Somerby and Halperin are right: it’s a sign of things to come. The press has never liked Hillary, and she’s never liked them, and that’s that. If she decides to run for president, this is going to be one of her biggest problems—or maybe her biggest, period. She’s just never going to catch a break.