Paul Waldman thinks Republicans have become a bunch of bumblers and idiots:

Think about it this way: Has there been a single instance in the last few years when you said, “Wow, the Republicans really played that one brilliantly”?

In fact, before you’ll find evidence of the ruthless Republican skillfulness so many of us had come to accept as the norm in a previous era, you’ll need to go back an entire decade to the 2004 election. George W. Bush’s second term was a disaster, Republicans lost both houses of Congress in 2006, they lost the White House in 2008, they decided to oppose health-care reform with everything they had and lost, they lost the 2012 election—and around it all they worked as hard as they could to alienate the 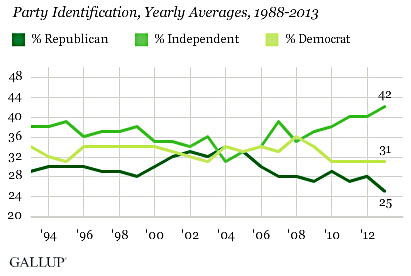 fastest growing minority group in the country and make themselves seem utterly unfit to govern.

In fact, in the last ten years they’ve only had one major victory, the 2010 midterm election.

Hmmm. It’s true that the GOP has had a rough decade in a lot of ways. The number of self-IDed Republicans has plummeted since 2004; their standing among the fast-growing Hispanic population has cratered; and their intellectual core is now centered in a wing of the party that believes we should return to the gold standard. This isn’t a promising starting point for a conservative renaissance.

Still, let’s not kid ourselves. If Republicans were really as woefully inept as Waldman says, then Democrats should be kicking some serious ass these days. I haven’t especially noticed this. They won in the sixth year of Bush’s presidency, when out parties always win, and then won in 2008, when an economic collapse pretty much guaranteed a victory for anyone with a D after their name. Then they had a single fairly good year—followed by an epic blunder that lost them a sure seat in Massachusetts, and with it control of the Senate. They got crushed in 2010. They won a squeaker in 2012 against an opponent who made a wedding cake figurine look good by comparison. For the last four years, they’ve basically gotten nothing done at all.

And what about those Republicans? Well, they have a hammerlock on the House, and they might very well control the Senate after the 2014 election. They’ve won several notable Supreme Court victories (Heller, Citizens United, Hobby Lobby, etc.). They control a large majority of the states, and have passed a ton of conservative legislation in areas like voter ID and abortion restrictions. Their “Just Say No” strategy toward President Obama has tied Democrats in knots. They won an all but total victory on spending and deficits.

Nor is it really true that today’s GOP is notably more bumbling than it used to be. The myth of “ruthless Republican skillfulness” in the past is just that: a myth. George H.W. Bush screwed up on Supreme Court picks and tax hikes. Newt Gingrich—ahem—sure didn’t turn out to be the world historical strategic genius everyone thought he was in 1994. George W. Bush—with the eager backing of every Republican in the country—figured that a war in Iraq would be just the ticket to party dominance for a decade. Ditto for Social Security reform. Republicans were just sure that would be a winner. By contrast, their simpleminded Obama-era strategy of obstructing Democrats at all times and on all things has actually worked out pretty well for them given the hand they were dealt.

Make no mistake: It’s not as if Republicans have been strategic geniuses. There’s no question that they have some long-term issues that they’re unable to address thanks to their capitulation to tea party madness. But if they’re really so inept, how is it that in the past 15 years Democrats haven’t managed to cobble together anything more than about 18 months of modest success between 2009-10?

I dunno. Republicans keep getting crazier and crazier and more and more conservative, and liberals keep thinking that this time they’ve finally gone too far. I’ve thought this from time to time myself. And yet, moving steadily to the right has paid off pretty well for them over the past three decades, hasn’t it?

Maybe it will all come to tears in the near future as the lunatic wing of the party becomes even more lunatic, but we liberals have been thinking this for a long time. We haven’t been right yet.