The Syrian border town of Kobani is the latest shiny toy for the press to latch onto in the war against ISIS:

As warplanes from the U.S. and the United Arab Emirates pounded Islamic State fighters near the Syrian city of Kobani for a third day, the U.S.-led military campaign began running up against the limits of what air power can accomplish. “Airstrikes alone are not going to save the town of Kobani,” Rear Adm. John Kirby told reporters at the Pentagon on Wednesday.

….Despite an intensifying air campaign in Fallouja and other cities not far from Baghdad, an effort that in recent days has included use of U.S. attack helicopters, the Iraqi army has 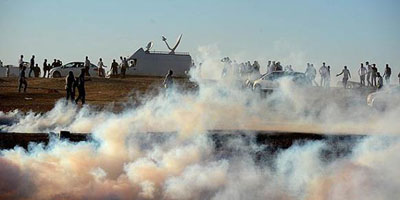 continued to lose ground to the militants, U.S. officials acknowledged.

We all know what’s coming next, don’t we? Two weeks ago, everyone — absolutely everyone — was unanimous in agreeing that (a) we needed to act now now now, and (b) we should never put boots on the ground in Iraq. But now that the obvious is happening, I think we can expect an extended round of breast beating and humanitarian keening about the well-known limitations of air campaigns; the horror of watching innocent Kobanis die; and the lamentable lack of planning and leadership from the White House.

Some of this will just be partisan opportunism, but most will be perfectly sincere protests from people with the memory span of a gnat. What they want is a magic wand: some way for Obama to inspire all our allies to want exactly what the United States wants and then to sweep ISIS aside without the loss of a single American life. Anything less is unacceptable.

But guess what? The Iraqi army is still incompetent. America’s allies still have their own agendas and don’t care about ours. Air campaigns still aren’t enough on their own to stop a concerted ground attack. This is the way things are. There are no magic wands. If you want quick results against ISIS, then speak up and tell us you want to send in 100,000 troops. If you’re not willing to do that, then you have to accept that lots of innocent people are going to die without the United States being able to offer much help. Make your choice now.