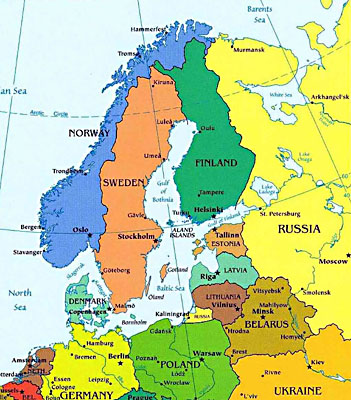 Behold the results of Vladimir Putin’s brilliant strategy of scaring the hell out of every single country within bomber range of Russia:

As Russian-backed separatists have eviscerated another non-NATO neighbor this year — Ukraine — Finnish leaders have watched with growing alarm. They are increasingly questioning whether the nonaligned path they navigated through the Cold War can keep them safe as Europe heads toward another period of dangerous standoffs between West and East.

….The palpable anxiety in this country that many in the West consider a model of progressive and stable democratic governance reflects how unsettled Europe has become since Russia’s annexation of Crimea in March. Many in Helsinki are convinced that Russia will not remain deterred for long and say Finland needs to fundamentally rethink elements of its security policy that have been bedrock principles for decades.

….“It’s going in a terrifying direction,” said Elisabeth Rehn, a former Finnish defense minister who favors NATO membership. “It’s only been 100 years since we gained our independence from Russia. Crimea was a part of Russia, too. Will they try to take back what belonged to them 100 years ago?”

Rehn said she doubts Russia would go that far but said the fear of Russian military aggression is real.

Will Finland join NATO? Probably not anytime soon. But just think about what Putin has accomplished here. Finland stayed out of NATO for the entire four decades of the Cold War, but is now so unnerved by Russia’s actions that it’s seriously thinking about joining up. If Putin is truly afraid of Russia being fully surrounded by the West, his worst fears are about to come true thanks to his own actions. No one wants to be the next eastern Ukraine, and right now NATO membership is probably looking mighty appealing to a lot of people who were OK with the status quo a few years ago.

Putin’s bellicose nationalism may play well at home, but it sure isn’t doing him any favors anywhere else.