Back in 2007, the military success of the famous “surge” in Iraq was due largely to the fact that many Sunni tribal leaders finally turned against al-Qaeda and began cooperating with the American army. This so-called Sunni Awakening was a key part of the tenuous peace achieved a year later.

It was a fragile peace, however, and eventually it broke down thanks to the lack of a serious political effort to include Sunnis in the central government. By last year, the Sunni areas of Iraq had once again begun to rebel, and ISIS took 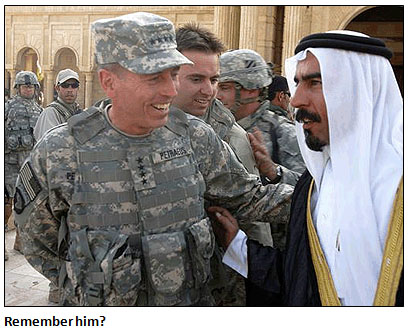 advantage of this to storm into Iraq and take control of a huge swath of territory. If we want to regain this ground from ISIS, the first step is to once again persuade Sunni tribal leaders to cooperate with us, but it looks an awful lot like that particular playbook isn’t going to work a second time:

Officials admit little success in wooing new Sunni allies, beyond their fitful efforts to arm and supply the tribes who were already fighting the Islamic State — and mostly losing. So far, distrust of the Baghdad government’s intentions and its ability to protect the tribes has won out.

….Much of the Islamic State’s success at holding Sunni areas comes from its deft manipulation of tribal dynamics. Portraying itself as a defender of Sunnis who for years have been abused by Iraq’s Shiite-majority government, the Islamic State has offered cash and arms to tribal leaders and fighters, often allowing them local autonomy as long as they remain loyal.

At the same time, as it has expanded into new towns, the Islamic State has immediately identified potential government supporters for death. Residents of areas overrun by the Islamic State say its fighters often carry names of soldiers and police officers. If those people have already fled, the jihadists blow up their homes to make sure they do not return. At checkpoints, its men sometimes run names through computerized databases, dragging off those who have worked for the government.

“They come in with a list of names and are more organized than state intelligence,” said Sheikh Naim al-Gaood, a leader of the Albu Nimr tribe. The most brutal treatment is often of tribes who cooperated with the United States against Al Qaeda in Iraq in past years, mostly through the so-called Sunni Awakening movement supported by the Americans.

Obviously ISIS may overplay its hand here, or simply overextend itself. They aren’t supermen. At the same time, it’s obvious that ISIS is well aware of how the original Sunni Awakening played out, and they’re doing an effective job of making sure it doesn’t play out that way again. Sunni leaders are already distrustful of Americans, having been promised a greater role in governance in 2007 and then seeing that promise evaporate, and ISIS leaders are adding a brutal element of revenge to make sure that no one thinks about believing similar promises this time around.

All this is not to say that things are hopeless. But a replay of the Sunni Awakening isn’t going to be easy. Sunni leaders have already been burned once and were unlikely from the start to be easily persuaded to give reconciliation another chance. ISIS is reinforcing this with both deft politics and brutal retaliation against collaborators. It’s not going to be an easy dynamic to break.